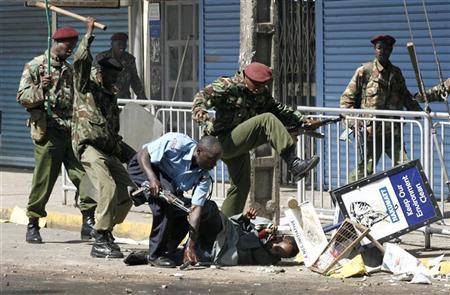 What are the Rights of arrested persons in Kenya

The two year sentence conviction for Alan Wadi Okong’o aka Lieutenant Wadi for ‘undermining the authority of President Uhuru’, by Magistrate Ann Waguru brought into focus the rights of an arrested person since he lacked legal representation. According to the charge sheet, Wadi was prosecuted based on Section 13 (a), (b) and 2 of the National Cohesion Act, which if he was well informed of the gravity of the case, the fourth year student of Political Science would probably be free today.

Section 13 of the National Cohesion Act (2008) relates to Hate speech. The specific clause he was charged states;

(1) A person who— (a) uses threatening, abusive or insulting words or behaviour, or displays any written material;

(b) publishes or distributes written material;

(2) Any person who commits an offence under this section shall be liable to a fine not exceeding one million shillings or to imprisonment for a term not exceeding three years or to both.

If Wadi had a lawyer he probably wouldn’t be in jail right now. #iFreeKE

The case which sparked controversy on how fair the trail was and the general safety of internet content creators in Kenya in exercising their rights to expression including when challenging the government ignited the Constitutional rights that an arrested person is entitled to. Perhaps, Wadi’s failing was to admit culpability, but he probably was not well aware of his rights, albeit some have argued that he could have been coerced by the state to confess.

Be as it may, the Constitution, guarantees an arrested person certain rights as well as procedures on what should be done:

(a) to be informed promptly, in language that the person understands, of—

(i) the reason for the arrest;

(ii) the right to remain silent; and

(iii) the consequences of not remaining silent;

(b) to remain silent;

(c) to communicate with an advocate, and other persons whose assistance is necessary;

(d) not to be compelled to make any confession or admission that could be used in evidence against the person;

(e) to be held separately from persons who are serving a sentence;

(f) to be brought before a court as soon as reasonably possible, but not later than—

(i) twenty-four hours after being arrested; or

(g) at the first court appearance, to be charged or informed of the reason for the detention continuing, or to be released; and

(h) to be released on bond or bail, on reasonable conditions, pending a charge or trial, unless there are compelling reasons not to be released.

(2) A person shall not be remanded in custody for an offence if the offence is punishable by a fine only or by imprisonment for not more than six months.