Abortion; Is The Right, right? 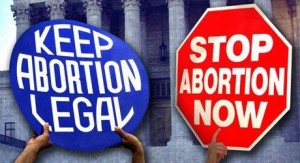 I walk into a room and my friends are in the middle of a very heated discussion on abortions and how the Kenya Constitution has a laudable stand as regards procuring abortions and while at it has not legalized the ‘evilised’ practice in the society. There’s this specific friend of mine that was being bashed quite literally by everyone so i sought to find out what exactly the question in issue was and this is what she had to say “Here’s the thing,abortion in our constitution has been legalized in the event the life of the mother is in danger,or if permitted by any other written law, which in my opinion is rather unacceptable.I mean we live in a society that people take anything for an answer without keenly looking at the moral consequences of a situation however grave.” to justify this he went on to say how by simply saying the mother’s life was in danger one could get away with an abortion.Off course i just comment on the face of it and life goes on,we did not however have a common stand as to whether the provision in the Constitution of Kenya 2010 was one to be lauded or not.

This prompted the question on whether the abortion right (limited) is right.Is it acceptable in society?

The very controversial discourse on law and morality interacting societal issues and the law is a discussion we come across way too often yet not a subject ultimately decided on.Who decides what is wrong and what is not? whose morality is the concept of wrong and right based on? The supreme law of the land that saw its promulgation in August 2010 gives this stand on abortion;

Article 26 provides;
(1) every person has the right to life
(2) the life of a person begins at conception
(3) a person shall not be deprived of life intentionally except to the extent authorized by this Constitution or other written law
(4) abortion is not permitted unless in the opinion of a trained health professional, there is need for emergency treatment, or the life or health of the mother is in danger or if permitted by any other written law

Before the promulgation of the Constitution of Kenya 2010 and even through its drafting the issue of abortion had been a bone of contention between the pro-life and pro-choice groups. The pro-life group advocating for the sanctity of life arguing how every life was important and began at conception.Begs the question,doesn’t the mother have a right to life too as a universal right enjoyed by every individual? The religious institutions gave an opinion on this issue arguing that the abortion clause should be gotten rid of altogether since it advocated for termination of a life which contradicts their beliefs which are protected under Article 32(1). This move by the religious institutions was in a way asserting that religious beliefs should be the base of our morality and in turn,the law.

The pro-choice group on the other hand argues that legalization of abortion is key in preventing maternal deaths.And the question of right to life all over again finds its way into the discussion,prevention of maternal death in itself is aimed at preserving a mothers life in the case of complications during a pregnancy that cannot be carried to term.According to a survey, approximately 35% of Kenya’s maternal deaths are caused by unsafe abortions.An estimated 800 abortions, induced or unprompted, occur on a daily basis and over 2600 women in Kenya die due to unsafe abortions.As per the survey, pro-choice group’s sentiments would only be viable if legalisation of the procedure would guarantee safety. How then, will the meaning of legal abortion be implemented in the current medical system.

The announcement of a new constitution saw a new dawn as regards abortion and as well many other fundamental points of interests as such devolution,separation of powers just to name a few.In the same way the Wanjiku had expectations on how the new law would safeguard their interests more efficiently as opposed to the old law which as regards abortions for instance,simply prohibited it,no more no less , they expected the introduction of the abortion clause,a bid to save the life of the mother and still uphold the right to life.

Four birthdays later and Wanjiku does not have much to write home about as concerns the effects that article 26 has on their reproductive health and in extension its role in the stigma associated with this subject.Imagine a world,where there is no victimization associated with legal abortion within the meaning of Article 26.

Demystifying the so called taboo starts with addressing the very specifics that the new document highlights for instance what is the meaning of a trained health professional within the constitutional framework. The worry being, can a nurse or a clinical officer authorise this high risk procedure and how would the pro choice group ensure this is adhered to without bringing up the question of morality as pertains the integrity of the health professionals.In a society of loose morals,the word ‘legal abortion’ would be a relative term.

After all is said and done,a procedure has been set up to ensure abortions are safely administered,and even when the rate of unsafe abortion becomes negligible,does it make it right?I do not think so!