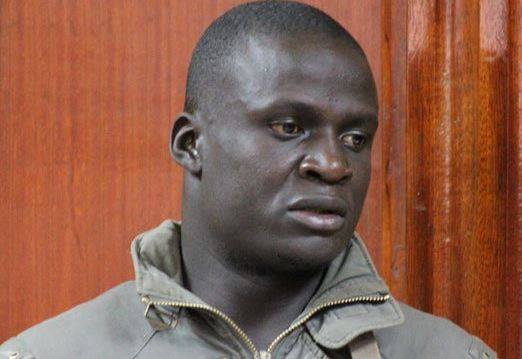 A fourth-year university student will spend two years in jail for posting on social media  insults against President Uhuru Kenyatta.

Alan Wadi Okengo, alias Lieutenant Wadi, was accused of posting the messages on his Facebook account on December 18 and 19 at an unknown place within Kenya. Wadi, 25, a political science student at Moi University, was arrested as he attempted to sneak out of the country through the Busia border on December 31.

He was brought back to Nairobi CID headquarters where he was interrogated by cybercrime police sleuths.

Wadi, who looked composed, told Milimani Law Courts resident magistrate Ms Ann Kaguru that he was ready to “apologise to President Kenyatta personally if he was not handed down a custodial sentence.”

The charge against the university student stated that “the message he sent was calculated to to bring into contempt the lawful authority of the President of the Republic of Kenya.”

His plea was not factored when he was he was being sentenced after pleading guilty to two charges of hate speech and demeaning authority of a public officer, contrary to Section 132 of the Penal Code.

In her ruling, Ms Kaguru said,

“the offence is serious and a deterrent penalty is called for to serve as a warning to others abusing the social media forums.”

She proceeded to pronounce the sentence after saying that

“he was convicted on his own plea of guilty.”

A state counsel, Mathew Karori, told the magistrate that the accused was arrested while he was about to cross the border through “panya routes” (unofficial exit) to a neighbouring country.”

Mr Karori urged the court to treat the remorseful student as a first offender although he said the abuse of the social media forum should be discouraged.

Wadi was accused of posting the two offensive messages when National Assembly passed the Security Laws (Amendment) Act No 19 of 2014 on December 18 and the following day when President Kenyatta signed the Bill to become law last year.

The first indictment was that he posted a hate speech message intended to stir up ethnic hatred between various Kenyan communities on the other by alleging a particular tribe should be deported to their home county.

Reaction from Kenyans On Social Media

The jailing of Allan Wadi drew sharp reactions from Kenyans Online with most of twitter sharing their sentiments using the hashtag #AllanWadiJailed. Many were however supporting the action taken against Wadi for what they believed was pure hate speech which most believed, went beyond the boundaries of freedom of expression.

#AllanWadiJAILED Allan this was too extreme you deserved a life sentence. pic.twitter.com/wuy49C5MJZ — Shed My Blood (@VictorMochere) January 3, 2015

I do agree there has to be a limit to freedom of speech.You cannot say what #AllanWadi said and not expect to be charged #AllanWadiJAILED — Ahmed Tawakal (@atawakal) January 3, 2015

Still there were those who believed that, despite Allan abusing his right of free speech online, he did not warrant such a punishment and that the sentencing reflected badly on the current Jubilee government as well as on the president himself.

Hope im nt late, So its like the Government Vs a mere college student!!!! Someone help #Wadi pliz #AllanWadiJAILED