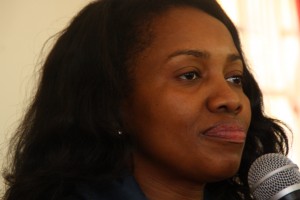 Members of the County Assembly (MCA’s) of Nakuru on Tuesday, March 10, 2015 engaged in fists and blows in what is now turning out to be a leadership battle growing out of proportion.

Trouble started when the MCA’s noticed a suspicious man in the house standing in the space that is usually set aside for members of the Press. At first the man, who would eventually turn out to be a plain cloth officer, claimed to be a journalist. But a section of the MCA’s who were not satisfied with his explanation asked him to produce his Press card upon which he failed and thus ejected him out.

But by then the house had already been set on a fighting mood, literally. By the time the Speaker, Susan Kihika got into the house battle lines had already been drawn pitting supporters of two members fighting for the seat of the Leader of Majority.

The two are Mosop MCA George Mwaura who was ousted from the seat last year after he allegedly fell out with the tough talking Speaker, politically, and Naivasha East MCA Waithuki Njane who replaced him. Although Mwaura was reinstated by the Political Parties Disputes Tribunal last week he has not resumed his position as his opponent acquired a High Court order blocking him from doing so.

Although a section of MCA’s refuted that this was the reason why the house burst into flames of fists and punches instead of reasonable debate, it was easy to see how deep the divisions in the house had gone as the leaders pounced on each other.

Speaker Kihika was forced to conduct the business as Sergeant at Arms stood by the mace and often having to stop to give a break for wrestling matches among the MCA’s.

Among those who seemed to have had their hell broken loose is Nesuit MCA Samuel Tonui. Tonui who is also the Deputy Speaker kept on exchanging blows with those he fell out with during the session that lasted for more than half an hour. Later he justified his conduct to the Press saying he was fighting for his rights.

“The Speaker had goons. I was defending myself and will continue to fight,”

he said moments after the chaotic session came to an end.

A section of MCA’s also accused the Speaker of high handedness in handling the business of the house. Dundori MCA Steve Kihara said she was a dictator and they want to impeach her.

“When we fought for the Constitution she was not there,”

he said while referring to Kihika who came to Kenya recently from America where she was an attorney.

“This County is going to the dogs and we ask President Uhuru Kenyatta and his Deputy William Ruto to help us sort out the issues. George Mwaura, one of the people who it is believed is in the midst of the chaos supported this stand.

“This issue had nothing to do with the seat of the Leader of Majority, it’s about the Speaker being partisan and a dictator,”

he reluctantly told Kenya Monitor while avoiding to say whether if the standoff continued he would relent and let go the seat.

But those opposed to Mwaura and his likely supporters were quick with a rejoinder supporting the Speaker. Biashara Ward MCA Stephen Kuria even asked for the conduct of all rowdy MCA’s to be investigated by the Ethics an Anti Corruption Commission while terming the turn of events as shameful.

Kaptembwa MCA Daniel Ambale who is also the Leader of Minority said the presence of the police officer in the house should not have been an issue saying such a scene had been foreseen hence the need of more security.

“We are aware of the presence of the police in the house today. The best way my colleagues would have done is to follow the rules and procedures of the house,”

he said terming the chaos as “barbaric.” The MCA’s have vowed to continue with their business in the succeeding sessions with both factions promising equal response to whatever actions of their opponents.

And unless a quick solution is arrived at the standoff promises to continue scattering the little gains of devolution at the county so far.