Moses Kuria gets a dressing-down from George Kegoro 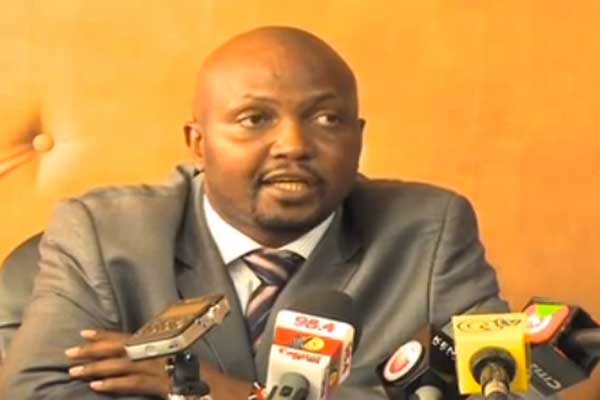 Moses Kuria speaks at a past press conference. The MP has received criticism for making ethnically divisive comments (Photo/www.mediamaxnetwork.co.ke)

Gatundu MP Moses Kuria today got a public dressing-down from vocal Kenyan human rights lawyer George Kegoro over his “sycophantic” defense of the Jubilee administration. Kegoro gave Kuria a severe reprimand during a debate held at the Hilton Hotel earlier on Tuesday to take stock of the Supreme Court of Kenya’s ruling on the March 4th presidential election petition.

Kegoro and Kuria are both columnists for local newspapers and have often thrown veiled barbs in each other’s direction but this was the first time that they were sparring in such a public forum. When Kuria took to take the stage and, channeling the familiar “accept and move on” rhetorical stance, said it was time to stop whining and move forward as a country.

Moses Kuria Supreme Court ruling have effects. We should get together and stop worrying about the past. We could get value out of this.

Hehehe. @itsgeorgekegoro just told @moseskuria that he’s the face of intolerance for the Jubilee Coalition. #rethinkingelectionske

Kegoro has gone HAAM on Moses Kuria. Schooling him on the fleeting nature of political sycophancy. I’m so amused!!!!!

‘You only want to see a world in which all praise Kenyatta. It won’t happen.’ @itsgeorgekegoro to @moseskuria. Weh! #rethinkingelectionske — Nanjira (@NiNanjira) April 21, 2015

By all accounts it appears to have been quite the tongue lashing.

Yho! This is like a roast, only it’s not comedy. George Kegoro has NAILED it!!! Audio/video need to get online! #rethinkingelectionsKE — Nanjira (@NiNanjira) April 21, 2015

Martha Karua, a panelist on the day and a presidential candidate in the 2013 polls, also piled in on Moses Kuria although her critique wasn’t nearly as caustic as Kegoro’s.

‘If remembering yesterday is whining, we must whine even more.’ @marthakarua #rethinkingelectionske — Nanjira (@NiNanjira) April 21, 2015

‘We must “whine” about yesterday, so that we can learn today (plan better for tomorrow).’ @marthakarua#rethinkingelectionske — Nanjira (@NiNanjira) April 21, 2015

‘If we hadn’t continued to irritate Moi govt, we wouldn’t have gone back to multiparty democracy.’ @marthakarua #rethinkingelectionske

Given his penchant for making ethically charged and divisive comments, some Kenyans were against Moses Kuria’s attendance at the event.

Sharing a platform with The Honorable Moses Kuria is giving him and his brand of politics legitimacy.

Moses Kuria sharing a platform with James and Martha. I mean. Eh? https://t.co/h13KTr7cWE

@254Anonymous Moses Kuria has no moral authority to speak to civilized people!! He’d be better off in a jungle somewhere!!

The consensus is hard to ignore. Moses Kuria is in to danger of wining a popularity contest in Kenya any time soon. That said, it’s important to hear out people like Kuria so that their opinions can be subjected to public scrutiny and debate.