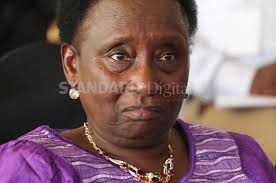 The deputy governor said the speaker’s proposition is a tactic to derail the implementation of the two third-gender rule as stipulated in the constitution.

Adelina said that the gender rule should not be misconstrued to mean that women were being offered leadership positions on silver platter.

“It should not assumed that women are just being given these positions as flowers,” she said.

The deputy governor noted that despite women being the majority electorate it was still difficult for women to marshal their votes to elevate fellow women to leadership positions due to the patriarchal nature of the Kenyan society and underscored the need for implementation of the gender rule.

“We are socialized to believe that men make better leaders than women,” she said

While addressing journalists in her Wote office, the deputy governor admitted that the 47 women reps had not made impact as expected due to lack of funds but added she will rally behind other women legislators to seek an alternative formulation to have women well represented in Parliament.

However the two gender rule has faced stiff opposition from residents of Makueni county on Facebook. Some dismissed it as sheer nonsense. 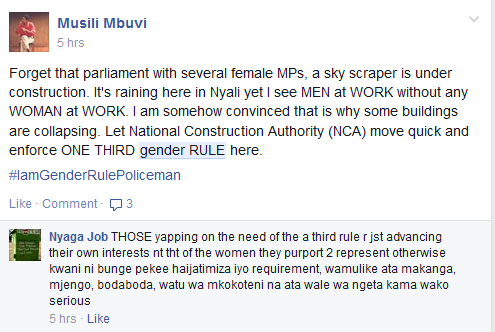 The opposition was overwhelming. However despite the residents opposition, Mwau’s sentiments  have been echoed by other leaders who have come out to oppose the speaker’s proposal for scrapping the seats. CORD leader Raila Odinga has accused the Jubilee government of failing to implement the constitution.

Raila has threatened mass action if the National Assembly and Senate do not implement the gender rule whose deadline is 27th August 2015.

Martha Karua has also said that the attempt to postpone the gender rule is selfish. The proposal by speaker Muturi has created a heated debate and it will be interesting to see out the issue folds out in the next few months before the August deadline.