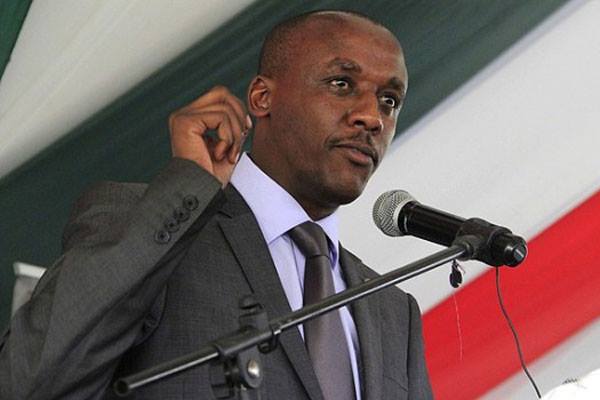 Leaders from Kajiado and Makueni County are embroiled in war of words over a border dispute between the two counties. The dispute was triggered by Makueni Senator Mutula Kilonzo Junior recent remarks that a piece of land measuring 800 metres from the railway line in Emali town falls under Makueni County.

The senator’s declaration has sparked protests among the Kajiado leaders who have insisted that the boundary between the two counties lies at the colonial railway line and not at Emali town as implied by the Makueni senator.

Led by Kajiado Governor David Nkedianye, the leaders have appealed for calm and disclosed that a meeting slated for June 11 in which leaders from both counties are expected to attend will seek to resolve the border issue.

Other leaders in Kajiado who have echoed the governor’s sentiments to have the border dispute expeditiously resolved include Senator Peter Mositet, County Commissioner Kello Harsama and Imaroro Member of the County Assembly (MCA) Timothy Sayoro.

Makueni Governor Kivutha Kibwana in a Facebook post also urged the residents of both counties to refrain from engaging in any confrontations saying that the matter will be resolved by leaders from both the Kamba and Maasai communities.

The leaders’ meeting which, the Kajiado Governor has confirmed his attendance is however facing imminent opposition from a section of leaders from Makueni. Senator Mutula Junior has declared that he will only attend the meeting if officers from the National Land Commission and Independent Electoral and Boundaries Commission will be present.

Emali Ward Representative Cosmas Kaleli has also resounded the Senator’s sentiments saying that he will only honor the invitation of the crisis meeting on the condition that officers from the two institutions avail themselves.

The simmering border dispute has caught the attention of Makueni residents on social media stirring a debate. Some of the residents have underscored the need to have the dispute resolved urgently saying it could be a recipe for chaos.

Others  noted that the border disputes between Makueni county and Kajiado need to be addressed effectively.

While others said they were ready to protect the boundaries at whatever cost.

Few others believed that an amicable solution will be arrived at.

The boundary between the two counties was informed by the Districts and Provinces Act (1992)  which states that Emali town is the boundary. The Act has since been adopted as an electoral boundary by IEBC.

The Maasai community however claim they were not consulted when the Act was drawn and insist that the railway line should remain the boundary.

Makueni, has in the recent past been embroiled in border disputes among three counties which have not been fully resolved. Taita Taveta has claimed Tsavo river which according to 1992 act belongs to Makueni county while Machakos and Kajiado have claimed that Konza Technocity and part of Emali town respectively.

As the county leaders from Makueni and Kajiado counties prepare to meet and discuss the dispute, the opposition not withstanding its should be noted that parties involved should move with speed and settle the disputes and reclaim lost land where applicable and perhaps settle the matter once and for all to save future generation from similar disputes.