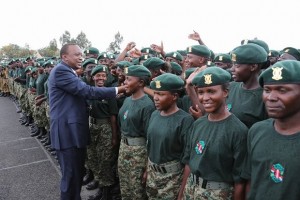 Even as concerns over alleged corruption at the National Youth Service (NYS) continue to dog the devolution and planning ministry, documents with Kenya Monitor reveal that the institution plans ambitious restructuring that will see it not only become a money making public institution but also provide credit (loans) to members. The plan is premised on four pillars;

The document is believed to have been prepared by a team led by Mutahi Ngunyi’s consulting company Consulting House for NYS and the devolution ministry. In recent days, Ngunyi has defended the consultancy payments stating that he was paid much more than sh38M reported, going further to state that he was considering suing The Star newspaper for reporting a lower figure than he was actually paid.

It is evident that the document in our possession is already being implemented as the listed changes are already being acted upon. For instance, during vetting before the joint parliamentary committee of labor and finance, the devolution Cabinet Secretary Ann Waiguru stated that youths in areas like Kibera have already saved some huge sums of money through the Sacco which they can use to borrow loans.

Under the first pillar, Paramilitary and Service Regimentation, NYS will recruit and train 21,870 youth every year. To recruit 10,935 twice a year where start date for each cohort to be in July and January. The graduation is planned for November and May of each year ensuring that every 6 months a Huduma Corps of 10,935 will be graduated. The recruitment for this is planned to be inclusive to ensure it abides by the dictates of the Constitution and also promotes efficiency of operations.

The second pillar, The National Service and Youth Re-Socialization,  is referred to as the ‘high-impact’ stage – at least in the short to mid-term periods. This has been put into nine categories;

Vector Control Unit – This will be constituted as a stand-by unit at the level of a service division numbering 3,645 servicemen and women. This is the second highest level in military formation. Three divisions constitute an army.

Traffic Control Unit – This will be pitched at the level of a service brigade. It has been divided traffic zones in Nairobi into 12 sectors.

Each zone will be manned by a Squad-Minus supported by designated officers from the Police Service. This is the third highest level in military formation. Three brigades constitute a division. In regimentation lingua, a group that is less than the assigned number of service men in a squad (15) is a squad-minus.

Dam Construction Unit – Government intends on constructing 1,100 dams a year. The NYS Dam Unit will constitute a Service Brigade-Plus of 2,250 who will be primed to undertake these dam construction works.

Road Construction Unit – Split into three categories, it is expected to help build roads of different classes across the country.

Slum Civil Works and Public Environment – They will work alongside the servicemen/women in the cleaning, minor constructions, beautification and other environmental activities in the slums.

Huduma Kitchens – These servicemen/women will be stationed in different urban spaces and will use the existing infrastructure of government partners such as religious institutions and other philanthropic bodies to provide a meal a day for the poor and homeless.

Public Duty and Security – The goal in the Public Security component of national service is to make NYS the premier choice for professional, disciplined and military trained drivers for government and private sector VIPs and guards.

NYS Service Constabulary – This will comprise of young people, interested in regimentation and engaging in petty public duties at county level. The ultimate aim of this unit will be to connect the constabulary members (ex-NYS trainees) with the Collection Guilds of unemployed youths to form business partnerships that would serve county governments in two areas on a piloting basis:

Demand for NYS services in these areas is on the increase from county governments. We will structure this and have it piloted in a number of counties.

Agribusiness – This regiment will be tasked with leading agribusiness endeavors in counties and even national projects like the Galana Ranch Project and sell the produce to make money for government and they will be paid.

The fourth pillar is dubbed Enterprise and Youth Economy. It authors that

This thematic pillar will provide a strategy for exploiting the youth bulge to become a demographic dividend. It answers the question ‘what next after NYS training’. Through its revitalization, the NYS can become a youth transition institution that connects the youth to gainful employment opportunities and self-employment in the present day economy. This exit phase will be the vehicle for realizing the pledges of the Jubilee government. The discipline, work ethic and vocational skill derived from NYS training will be a distinct selling point for these graduates as they enter the job market.

It is split into

1. SEPU/SACCOs – Establish a revolving fund to provide startup capital to NYS graduates. NYS graduates will be encouraged to organise themselves in squads (15), and will benefit from the funds as squads. The purpose of the squad is to provide social collateral

4. Commercialization of NYS training institutes – The idea in this is to create a module II training programme for percolation of social transformation training to non-NYS recruits. The intention is to double the capacity of trainees from 6,000 to 12,000. It will also create production units in the training centers. It also envision creating a revolving fund for expansion and maintenance

These pillars are certainly sound in terms of their target to various sectors in the economy. Only time will tell how they transform youth in the country and also positively contribute to nation building.