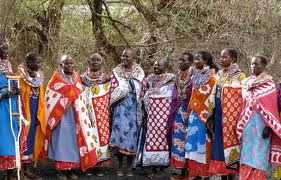 Business came to a standstill in Masimba trading center in Makueni County after more than 50 women from the Maasai community in Kajiado County invaded the trading center and attacked the Kamba women for allegedly snatching their husbands.

The irate women armed with crude weapons on Thursday descended on their unsuspicious counterparts in the sleepy market situated along the Mombasa –Nairobi highway leaving a trail of confusion and destruction.

Police were forced to fire in the air to disperse the angry women before the confrontation could degenerate into bloody chaos.

Confirming the 10am incident, area Administration Police boss Alexander Muasya said four Kamba women sustained injuries with one of them suffering a broken arm in the standoff that lasted until 4 pm.

Muasya said that the women also brought down stalls and destroyed bars before the police repulsed them.

“The women alleged that their husbands have ran away from the families to camp in the trading center where they spend most of their time drinking and engaging in immoral sexual activities,” said the AP commander.

He said police have launched investigations into the incident but disclosed that no arrests have been made so far.

Jessica Kanini who witnessed the incident unfold said the women invaded the market and started attacking  Kamba women indiscriminately accusing them of taking away their husbands.

“There were beating any woman on sight,” she said.

The two communities have in the recent past been involved in a border dispute and the attack by the Maasai women could be an escalation of the simmering differences between the two communities.