Nakuru PWD’s accuse government of sidelining them in NYS jobs 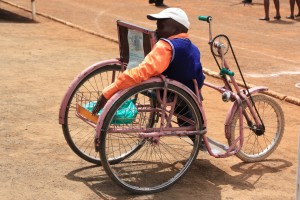 A man with disability a pas function in Afaraha stadium. The Senator’s office has confirmed to having received complaints of the discrimination (Photo: Kioko Kivandi).

Persons living with disabilities (PWD’s) in Nakuru County feel sidelined in the ongoing community projects in which the government is engaging youth through the National Youth Service (NYS) programme.

The NYS community projects include road construction, dam construction, upgrading of slums and agribusiness training and were launched in the county about a month ago.

Peter Maritim who is physically challenged and is who is one of the leaders of PWD’s in Nakuru claims that when the residents of the county were recruited by NYS officials in the social transformation and vocation training they were left out.

“None of us was recruited for the training exercise and this made some of us to feel inferior,”

he told Kenya Monitor. Maritim who is also the Vice Chairperson of the Nakuru sitting volley ball team argued that this was a form of discrimination based on physical conditions. He said it should be discouraged.

Echoing Maritim’s words, Philip Omondi another PWD in the county told Kenya Monitor that persons with physical challenges in the county are facing numerous hurdles in all spheres of life.

“I am shoe cobbler and when the hawkers were registering to be given stalls I did so but when the time came for the allocation I was left out,”

he said recalling the exercise that saw the Nakuru County Government relocate hawkers from the middle of the town at the crack of the year.

Both Maritim and Omondi feel by being segregated from the projects they are being denied an opportunity to transform their lives.

“Most of the people who have benefited from the NYS project have experienced social and economic transformation because they are paid wages based on the services they render and on top of that they are organized into saving and cooperative societies (SACCO’s) where they save 30 percent of their monthly allowances,” said Maritim.

While Martim admits that most of them can not carry out heavy tasks he feels but they are better placed to carry out supervisory roles and thereby there were no tangible reasons for them to be discriminated in the project.

“It is a fact we are not in a position to do heavy work but most of us are intelligent and when given a chance we can supervise people.”

“When we raised an alarm to the NYS authorities we were assured that we will be considered but that has remained to be an empty promise.”

What the group is asking from the county government is to take measures to ensure that they are fully involved in all projects including tenders.

“The society needs to nurture the talents and skills of people living with disabilities by providing necessary facilities and resources,” says Omondi.

“This will place them in a better position of becoming independent and financially stable and make them stop living in the streets as beggers that has been associated with the vulnerable group,” he adds.

While the PDW’s in Nakuru are optimistic of benefiting from the devolved system, they feel more needs to be done.

“The county government has failed to boost our living standards by providing us with necessary resources,” he concludes.

The NYS projects were launched in Nakuru County last month with an aim of involving youth in community activities such as slum upgrading in the Nakuru Town West constituency. An official at the Senator’s office in the county has told Kenya Monitor that they have received official complaints of alleged irregularities in the recruitment process of those being involved in the projects.

“We have been told that there was no proper ethnic composition, the job descriptions in the projects are also not clear and most of the time there is no work to do,” said Joseph Omondi.

Omondi who is the Manager at the Senator’s office said they will investigate and give an official report of the situation by end of the week.