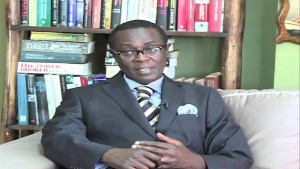 I apologize to the LUO NATION unreservedly. No harm INTENDED. I am a product of Luo SCHOLARS whom I RESPECT immensely. I eat the HUMBLE PIE.

Ngunyi had in a number of tweets casts aspersions on luos progressing because of their affinity to Raila Odinga.  Just before the disparaging tweets, Mutahi Ngunyi had followed Raila Odinga and Uhuru Kenyatta on Twitter and immediately thereafter started comments that can be seen to be targeting Raila and the luo as dependent on him yet he is a failure.

This Raila depiction is hilarious. Sugar farmers in wstern, and Nyanza;plus Kibera youth MUST hang it on their walls https://t.co/SqgI1CpiWH

The Luo Nation MUST liberate itself from the BONDAGE and poverty-producing SPELL of Odingaism. PERIOD. Is there a MOSES amongst the Luo?

The Luo Nation MUST liberate itself from the BONDAGE and poverty-producing SPELL of Odingaism. PERIOD. Is there a MOSES amongst the Luo? — Mutahi Ngunyi (@MutahiNgunyi) August 19, 2015

My KENYAN DREAM is to RETIRE in Kisumu City. I want intellectual conversation in old age. But one cannot PONTIFICATE in POLITICAL BONDAGE.

Raila is NOT the LUO NATION. To think he is amounts to PAVLOVIAN CONDITIONING. I was DEAD WRONG on Miguna. We need to RE-READ his Renditions — Mutahi Ngunyi (@MutahiNgunyi) August 19, 2015

The LUO NATION is spell bound by RAILA. Period. That is why they call him BABA like NYAYO. In fact the only BABA after NYAYO. Mental SLAVERY

Are LUOs poor? No idea.THEY SHOULD TELL US. Are there POVERTY STRICKEN LUOs. YES. Statistics: 82% of people in BONDO live below poverty line — Mutahi Ngunyi (@MutahiNgunyi) August 21, 2015

Ngunyi continued being personal on his tweets

PEACE to Raila and his SLAVES. No More attacks for NOW. I promise. My PLEDGE is to the THIRD REPUBLIC…The YOUTH… — Mutahi Ngunyi (@MutahiNgunyi) August 23, 2015

Apollo Mboya should be FIRED for abuse of office and demeaning the law profession. If he passed his law school, he should re-read my tweets.

I am writing to LSK Council to find out if LSK has become a branch of CORD. And if one Apollo Mboya speaks for council on this matter…. — Mutahi Ngunyi (@MutahiNgunyi) August 24, 2015

Apollo Mboya has since filed a petition with the National Commission and Integration Commission (NCIC) as he says the tweets were personally targeted at him. He wrote to the commission

“In particular, the posts target members of a specific community as lacking individuality and in a state of mental slavery, assertions that are not only false but may very well constitute hate speech directed at specific members of a community (of) which I am a member,” read the letter in part.
“It is my view that the words uttered by Mutahi Ngunyi are intended to incite feelings of contempt, hatred, hostility, violence and/or discrimination against a community on the basis of ethnicity and, therefore, committed an offence under Section 62 of the NCIC Act.”

Kenyans shared their thoughts on the apology, many stating that the apology is not sufficient to exonerate him from criminal culpability.

@MutahiNgunyi tweets were borderline tribal t say the least. He must be dealt with according to the law just like Wadi was dealt with .

As a member of high standing in the Luo community; I have rejected the supposed apology by Mutahi Ngunyi. Let the case proceed. Thank You! — Hon.Junet (@JunetMohamed) August 25, 2015

Kenyans had earlier showed their displeasure at the tweets using the hashtag #ShutMutahiNgunyiUp.

As it stands, the tweets are still on his timeline, something some have argued as insecure as he should at least have deleted them. Mutahi looked remorseful when making the apology in an interview with NTV, perhaps coming to terms with the gravity of his tweets.

How the NCIC deal with this issue will continue to shine a spot light on the commission and its role in stemming hate speech in the country. In the past their perceived favoritism on political leaders or people who hold high offices in the country like Hon. Moses Kuria, Hon. Chirau Ali Makwere and Hon. Alfred Keter among others may offer a view of whether to believe they will stem the vice especially since Ngunyi works with government, specifically the National Youth Service (NYS) where he was contracted to spearhead its restructuring and reform.