Former President Mwai Kibaki at the Promulgation of the Constitution on August 27th, 2010

On August 22nd 2011, Parliament voted to extend its sittings in a bid to beat the August 26 deadline to enact key constitutional Bills. MPs also voted to reduce the procedures needed to initiate debate on the Bills from 14 days to four days. The House Business Committee (HBC) that defines Parliament’s daily agenda, voted to bring motions to Parliament to extend sitting time and eliminate lengthy procedures required to pass constitutional Bills. Bills normally take 14 days from the date of publication before they can be introduced to Parliament for debate. The MPs went another step to pass procedural motions to eliminate the traditional Question Time and suspend private members’ motions in order to discuss the Bills.

In February 2012, Parliament was forced to extend its working hours in a last-minute rush to beat the deadline to pass seven Bills crucial to implementation of the Constitution. They had 12 days to pass the land management and devolution laws before the February 27 deadline. The Bills were County Governments Bill, 2012, Transition to County Governments Bill and the Intergovernmental Relations Bill, the National Land Commission Bill, the Land Bill, the Land Registration Bill and the Community Land Bill. Some of these Bills, like the Community Land Bill has yet to see the light of day today. Kenyan MPs at a past session of parliament. Corruption scandals involving MPs have shocked Kenyans given that they are some of the best remunerated elected representatives in the world. (Photo/http://uchaguzi.co.ke)

The tight legislative schedule MPs worried that they may be forced to rubberstamp the draft laws without adequate scrutiny. Indeed due to the previous similar manner of passing Bills, the then Minister for Justice and Constitutional Affairs Hon. Kilonzo Kilonzo revealed that MPs made more than 100 blunders as they hurriedly amended and approved 21 constitutional Bills ahead of the expiry of the implementation deadline set in the Constitution in August in 2011. The President assented to them but he hoped they will be corrected through Miscellaneous Amendment Bill.

The week of August 20th 2012, Parliament sat for extra hours in order to pass to pass five constitutional Bills whose deadline was expiring the next Monday. The move saw MPs debate and pass the Leadership and Integrity Bill 2012, National Intelligence Service Bill, the National Security Service Bill, the Kenya Defence Forces Bill and the Petitions to Parliament (Procedure) Bill.

In September of the same year, MPs extended the time required to pass the Election Regulations 2012 so that they can go through the voluminous guidelines tabled. The Elections Act stipulated that Parliament should approve the regulations at least six months to the General Election due on March 4, 2013. The then Constitution Oversight Implementation Committee (COIC) Chairman Mohamed Abdikadir said,

“We have resolved to amend the Elections Act 2011 to reduce the time of passing election regulations from six months to four months,” said Mr Abdikadir.

In July 2013, MPs sought to push to December the implementation of the Freedom of the Media Bill, Support for County Governments Bill, and the Public Participation and County Assembly Powers, and the Privileges and Immunities Bill. They managed to marshall the numbers and extended the deadline.
On August 19th 2014, lawmakers managed to whip 257 members to be in the House at the time, which is above the 233 or two thirds of the 349 members needed to amend the Constitution. The laws which were to have been passed by then included Public Services Bill, Persons Deprived of Liberty Bill and the Environment Management and Coordination (Amendment) Bill and other Bills are to implement Article 47 of the Constitution on fair administrative action, Article 50 on fair hearing and those to do with accounts and audits of public entities and changes to the procurement laws

Yesterday, MPs approved a special motion allowing the extension of a deadline for passing the last batch of Bills to implement the Constitution to August 2016. The motion by the Constitutional Implementation Oversight Committee (CIOC) was approved 260-11. Before the afternoon sitting, MPs had been barred from leaving the country and when they gathered in the chambers, they were not allowed to leave until all matters touching on the Constitution were dealt with. 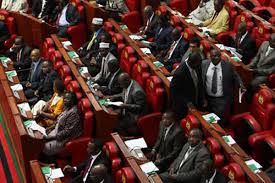 A section of MPs in session. Photo courtesy of oneworld.org

The last batch of 28 Bills, some which have been introduced while others have not include the Minimum and Maximum Land Holding Acreage, Agreements on National Resources Bill, Forest Bill, Community Land Bill, Physical Planning Bill, Investigation and Historical Land Injustices Bill, Land Use Bill and Evictions Bill.

Others are the Energy Bill, the Petroleum Exploration and Production Bill, the Bill on Representation of Marginalised Groups, Two-Thirds Gender Principle Bill, the Seeds and Plant Varieties Bill, the Organisation and Administration of Appeal Bill, and the Small Claims Court and the Contempt of Court Bill among others.

The prudence in extending the Bills is to ensure they give them the requisite time to avoid mistakes as had been occasioned especially before the General Elections. The main reason for the perennial extension has been delays by key institutions primarily the Attorney General’s office and the Commission on Implementation of Constitution (CIC) in delaying, sometimes due to differences, in availing the Bills to Parliament for debate.

But this needs to be arrested. Parliament needs to call to order these officers who are delaying key constitutional processes. Already, the CIC’s term expires this year and in the budget, Treasury factored their gratuity meaning that they will not extend their term. It is time the National Assembly sanctions those who delay to present these key Bills on time so as to avoid further extensions. They should also be presented in good time to allow for quality and healthy debate to inform the contents of the Bills so as to avoid amendments or provisions that infringe on other rights enjoyed by Kenyans.