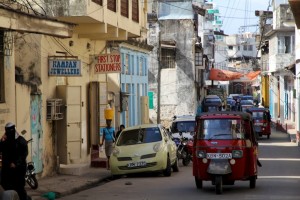 “Usidanganywe na mtu kwamba atakuchanja upigane na serikali…. Serikali iko  na jeshi, polisi, wapelelezi hutaiweza” (Do not be fooled to take  (MRC) oaths and start fighting the government. It is futile as the government has the police, army and investigators.)

Those were the warning words of Hon. Rashid Bendzimba the MP of Kisauni when he warned Kisauni youth against joining the Mombasa Republican Council (MRC) and other gangs that are recruiting youth. Chanja refers to a practice where youths are oathed into MRC and made to believe they are protected or “invisible” to the government bullets. The MP is yet another Mombasa leader that is taking on the insecurity situation  head on following a surge of violent crimes and gangs is Mombasa.

His counterpart Hon. Abdulswamad Nassir and Governor Ali Hassan Joho have already started dealing with the crime in the Old Town by holding community security barazas, encouraging community policing and deployment of county security in the old town region.

Since last year when a European was killed by unknown thugs in the streets of Kibokoni and earlier this year, a well recognized elder in the region was also shot by unknown assailants sending the rich historic old town into panic and dismay. Nonetheless, Mombasa County Commissioner Nelson Marwa has been assuring residents that security has been beefed up in all areas of concern. Last week in a press conference, he addressed the press about the security measures the county had taken to ensure that security is restored.

However, the County of Mombasa is not alien to gang crime which is accompanied by the resilient issue of drugs and substance abuse. The Deputy County Commissioner of Mombasa Salim Mahmoud, addressed journalists at a press meeting in his office following a crackdown by the police in old town before that had resulted to 22 suspects arrested in connection to a gang that has been terrorizing residents in the area disguising themselves in buibuis. He further added that some of the suspects were nabbed with knives, pangas and narcotics.

There will be County Askaris stationed in Old Town whose only job will be to ensure that there’s security. According to Mombasa Governor, Ali Hassan Joho, the crime rate in Old Town is being carried out by local youth who are finding shelter in the community. He called for a unity of purpose between the central government and county government in order to combat the criminals. Mvita MP, Abdulswamad Nassir also joined in the fight against crime in Old Town and agreed that the county would deploy more police in the area.

Governor Joho further added that  some of the individuals who carry out terrorist attacks and bank robberies in the region are local Muslim youths. He said they commit the crimes while wearing the buibuis and hijabs to hide their identities.

“We are appealing to all parents in Old Town to volunteer information regarding their children who are involved in crime,” he said.

The county has seen a slight increase of tourists flocking in numbers and this is perhaps the light at the end of the dark tunnel that had plummeted the tourism sector in the region to its knees.