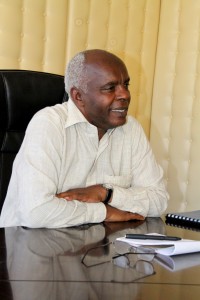 “We said we want Uhuru, then Africanization, then Constitution, then devolution, now it is public participation and the next will be revolution, which will not spare people,” stated Makueni Governor Prof. Kivutha Kibwana, when giving remarks on a visit to his offices by Jukumu Letu partners.

The comment was reflective of how the county is applying public participation, a national value and also principle of devolution and governance. “It will probably be an artistic revolution,” responded George Nderitu, the Manager of Sarabi Band for which the Governor quickly replied “that will be very kind.”

For Governor Kibwana to remark this, a person of no mean credentials in the struggle for a new constitutional dispensation in Kenya is not only pivotal, but weighty. But it probably reflects the reality in his own County, two years into office and already the citizens feel that their county leadership is wanting and want the entire leadership sent home and a new one, more responsive to them, is elected.

“We actually have public participation forums here, like to inform budgets. They are however public relations exercises because the Members of County Assembly (MCA) have normally decided on what is said and who can say it,” explained John, a boda boda rider in Mbumbuni market, Mbooni sub-county.

The County has designed the county into various units, going down to the village level for better communication and participation of people in governance but the Governor still feels they have yet to crack the puzzle as it should be. The administrative units are the six sub-counties, nine administrative districts, 25 divisions, 90 locals/sub-wards, 250 sub-locations and 3, 500 villages.

Participation starts at the village level where they map out the issues and challenges and what should be done. This information is then relayed at the sub-location level and the information moves up to the Governor.

A key challenge the Governor reckons are existing networks on various issues that prevent better service delivery. The political gatekeepers like on sand harvesting determine whether sand will be harvested in a certain area, who will harvest it, why and when. It is a position, shared by Anne Karimi, a chair lady of various women groups in the county.

“MCAs have total control of these public participation forums directly and through their henchmen. These henchmen ensure what is said in the meetings is to the benefit of the MCA and not the people. This helps them to push for own projects. For instance there is this time when one suggested a place for sand dam at a place where there is no river! But no one objected since if you do, you will be castigated by the henchmen who also hire members of the public to restrict diverse and mostly contrary views,” asserted John Syoki, an activist in the County. 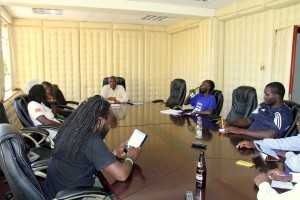 It is a position that was not out-rightly objected by Hon. Kelly Musyoka, the MCA for Kithungo/Kitundu ward. “Most MCAs want to control public participation processes and mobilize those the know will sing their songs. This is to ensure their desired results are achieved,” he asserted.

He adds that this certainly brings rifts between the MCAs and the county executive since they feel it should be as open as possible. He reckons that the executive always conduct open forums where anybody who wants to participate and contribute is allowed to do so.

The County uses public forums to engage the public on Bills, budgets and projects. This is done either at the ward level or selecting 10 representatives from each county and assembling them in one location to get their views.

Antony Ndolo, the Mobilization, Urgency for Paralegal Communities in Africa (MAPACA) program officer stated that he has witnessed three instances where MCAs show high handedness on public interest issues. “One was the Ward Development Fund which was unconstitutional, the other was the sand Bill and the other was the disability fund Bill.” He added that this is done by picking 10 representatives from each ward who are then paid sh2000.

Commenting on the Jukumu Letu initiative, the Governor said “the project seems to talk to society in a way society listens.” This could be because the initiative is using forms of art including social media, blogging, music, puppets and theatre to pass messages about the Constitution.

As Makueni residents prepare to present their views to the commission of inquiry into the affairs of the county, they are thinking of not just of electing new leaders, but also ways in which they can better have a say in their affairs in public participation opportunities. They are also hopeful that through avenues like music which many residents like, more will be enlightened of their rights and take part in deciding their fate.

In addition, there is a need for the county to legislate on what public participation entails, albeit this law does not exist at the national level, apart from the constitutional provision. “We need a well structured law on this. That law should state the threshold for adequate public participation so that it is not just about quantity but also quality. This should should also take cognizance of certain parameters that the public at large do not merit. For instance, if we have a Bill on nurses, only nurses will best say what should be legislated and not just anyone, same to issues of trade and taxes or levies, otherwise you can end up getting views that do not add value to the process,” asserted Hon. Kelly.