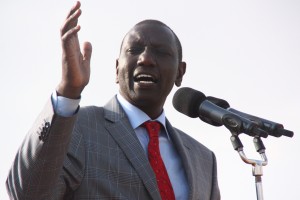 Deputy President William Ruto at a function in Nakuru last Saturday. He said Parliament and EACC were letting Kenyans down in the fight against corruption (Photo/Kioko).

The ongoing trend in which Kenyans keep on waking up to reports of bribery claims among Members of Parliament is disheartening. By end of last week Kenyans were discussing claims that members of the Parliamentary Accounts Committee (PAC) had been bribed to water down a report on misappropriation of funds in the Office of the President.

Then this week we woke up to the claims that another Parliamentary Committee – the Agriculture Committee – may also have been bribed to doctor a report touching on the collapse of Mumias Sugar company.

While these are just allegations, they are raising questions about the spirit and will among our Parliamentarians to fight corruption. They also raise the question of whether as a country Kenya will ever be able to deal with corruption if the people who are supposed to lead us in stemming out the crime are not far from being involved.

What is even worrying is the fact the institution that the law has mandated with the legal instruments of investigating the crime – the Ethics and Anti Corruption Commission (EACC) – is also engulfed in a war of its own with differences being reported among its commissioners.

Last week it was reported that the Chairman Mumo Matemu sacked his Deputy Michael Mubea before the Commission’s Chief Executive Halakhe Waqo reinstated him, a standoff that painted negatively on the image of an institution that should show the way on matters of integrity.

And now with reports that EACC has only prosecuted three graft cases in three years, Kenyans need to ask whether the institution is worth its salt.

Last weekend Deputy President William Ruto remarked that both Parliament and EACC were letting Kenyans down.
Speaking in Nakuru Ruto first challenged Members of Parliament to protect the integrity of the August house.

“What is at stake when we hear of all these allegations of corruption and bribery in parliament. It is an indictment of the August house. It is a disgrace to their mandate as their legislators. It is an insult to the electorate who elected Parliament, and it is a shame to our country. We want Parliament to put their house in order.”

He then turned on to EACC. “What they are doing, the supremacy wars that are going on; who is interdicting who, who is sacking the other, who is greater than the other, that is not the mandate they were given. They were given the mandate to look at after the collective interest of Kenyans, to look after their resources, and to make sure those who are corrupt and those who want to misuse resources are brought to book.”

As Ruto has put it, MP’s and EACC are letting Kenyans down. They need to lead the way in the fight against corruption. But looking at what has been happening in the last two weeks there isn’t even the slightest sign that are ready for the task. It is so disheartening.