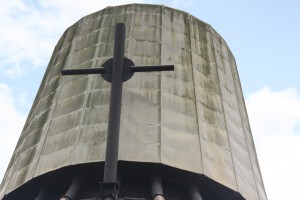 The Ugandan Martyrs shrine in Namugongo where Christians were killed for their faith. The Nakuru man says his faith does not allow him to possess an identity card and wants the court to grant him an affidavit to do live without one.

The spirit of God is ‘commanding’ men to do very unrealistic things these days. Just early this month the social media was awash with reports that a Nigerian Pastor had impregnated 20 members of his church because the holy spirit had commanded him to do so.

And in June last year, a Nairobi Pastor was reported to have defiled and impregnated his daughter aged 15 after a similar command.

Now a Nakuru man has received another ‘weird’ command from the holy spirit. It has told him not to accept an identity card (ID) as well as a personal identification number (PIN).

Joseph Muiyuro Njoroge who even without being told his age is mature by all means is asking a Nakuru court to grant him an affidavit so as to live without the trouble of bearing and caring these documents.

Through Ochweri, Ngamati & Company Advocates, Muiyuro who lives in Wanyororo Nakuru but who insists he is from Murang’a, has drafted an affidavit that only awaits the court’s decision before it becomes valid.

“That I am a member of the Akorino Nguo Nyeupe (Akorino church whose members dress in white) and our faith does nor allow me to possess an identity card and PIN Number,” his affidavit partly reads.

“That I swear this affidavit to support any transaction that I may do without the identity card or PIN Number,” it continues.

When he came to court today he was dressed in a white robe, a white pair our trousers underneath and a white scarf on his head, perhaps to emphasize the color aspect of his religion. He did not accept to shake hands with strangers as his religion does not allow such. “We usually go with our village head men every time we want to be identified,” he responded after being asked of how he conducts business. “We even have land and we have been able to get title deeds without ID’s,” he said shortly after leaving the court.

Although the affidavit indicates that he is the only one seeking the permission to conduct business without the identification documents, he indicated that he is doing it on behalf of his church. “We are about 100 members,” he said.

Asked how and when they received the communication from above he alludes to the bible saying “there are so many orders that were given but which are not written in the book.”

The request has been filed in chamber six of Nakuru Law Courts. Without being committal a court official attached to the chamber has hinted that it has been dismissed. “The man should be in jail by now,” the court official said.

An ID is the most basic identification documents. Without it a citizen is unable to participate in democratic processes such as voting as they can not be issued with a voters card among other documents. Not having an identity card can also be risky as it is difficult to identify any person who has never been registered.