MPs: the New Lords of Impunity 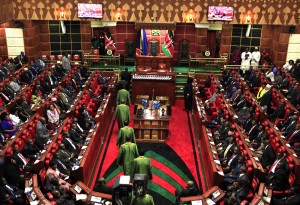 Kenyan MPs at a past session of parliament. Corruption scandals involving MPs have shocked Kenyans given that they are some of the best remunerated elected representatives in the world. (Photo/http://uchaguzi.co.ke)

As an inquiry continues into allegations that members of the Public Accounts Committee (PAC) took bribes to influence their findings into an investigation into how billions of public funds disappeared in the lead up to the 2013 election, we bring you the latest in a series of articles by an insider in the corridors of power that lay bare how corruption cartels are bringing Kenya to its knees.

In this piece Capt (Rtd) Collins Wanderi, the Chairman Kenya Institute of Forensic Auditors, exposes the extent to which our current MPs have become the “new lords of impunity” and why experience has taught him not to share what he knows with the concerned authorities.

Coming up in PART 5: How MPs are abusing Parliamentary Privilege to mint millions of shillings from State Corporations & Other Government/State Agencies.