It is 2.45pm and at Molo market, there is an ongoing heated conversation about the public participation forum on the budget that the participants had just attended. They call it their Bunge, Parliament, where the Chairman says “you are heard so long as you have something to say.”

These conversations are ongoing, every other moment at the same spot, they discuss various issues affecting them, sometimes joined by the elected leaders themselves. However at any time during the conversations, they have representatives from all the elected leaders. “Even as I speak to you, there are representatives here for the MCA, MP, Governor, Women Representative and Senator,” asserts a participant who is not comfortable to reveal his name.

These conversations have a speaker who moderates and directs debate. The Speaker, also called Chairman is John Kanja who is always looking forward to hosting these debates.

“This is a fruit of the Constitution. We can speak freely and know our fundamental rights and freedoms,” Kanja says. As they ponder on these figures, they are also interested in having some oversight role in how these funds have been used in the past.

“We want to do more monitoring of projects under these funds so that we can know their value to us. There is this Molo District Hospital which has some facility that is not yet complete. It is the ward for children, who currently share with adults yet they are vulnerable. We want these funds to finalize that ward so that our children are safer,” adds Sammy Kongo.

They also want better water services for them. The residents currently receive piped water from Chesoin dam but they say the distribution of that water to them is wanting.

Being an agricultural area, they have problems with fertilizers and farm inputs.

“We plant maize, vegetables and potatoes. However sometimes we lack enough fertilizers while at the same time diseases, like last year, destroyed all our maize and farmers were hungry,” said Kongo.

They would therefore want part of the ward allocations be used to construct a structure to hold subsidized fertilizers and also pesticides to guarantee yields. These ‘parliamentarians’ say the Constitution has birthed these benefits. Many here say they know their rights and cannot be violated by anyone while other say more needs to be done so that most residents are aware of their rights. They have learnt these rights through various civic education opportunities offered by civil society groups like Creco and CEDGG.

“Through this knowledge, we can now tell the value for money from projects being undertaken,” the chairman says.

“It would be great to expand our mortuary. The current has less bed capacity than the demand, as the reality is that the highway kills many people yet the mortuary is inadequate,” Sammy adds.

It is Rev. Jackson Agunza who revisits the issue of conflicts that Molo is largely known about outside the region. He is the chairman of the Internally Displaced People (IDPs) in Molo and says the government has neglected them.

“Molo has been forgotten while other areas have been attended to. It is good that there was no fighting in 2013 General Elections largely because the Kikuyu and Kalenjin communities came together in order to guarantee a win for them,” he asserts.

Rev. Agunza also laments at the lack of opportunities not offered to those not considered area natives. He says resource allocation to such people is limited which makes them feel disenfranchised. He however also attributes the current tranquility to peace efforts among communities.

There is a mixed feeling among youths as to how the political leadership has supported them.

“The Governor is very supportive. He has provided us the first seed for a merry-go round among youth groups and now various projects like motorbikes, planting and selling trees and brick making are ongoing,” says John Rukwa, a youth group leader in the Constituency also known as Turkana. 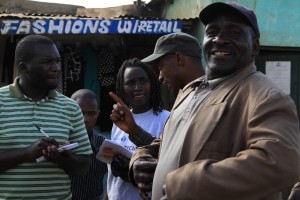 He however says the Member of Parliament and Member of County Assembly have neglected them.

“We need a lot of civic education on Uwezo Fund so that more youth groups can know about it and apply. We received the first disbursement for some few youth groups two months ago and groups are engaged in rabbit rearing and farming,” he adds.

How this enhanced civic education is done is something residents and leaders will think through as they move ahead. Kamau Mbugua, a matatu driver says if recent police recruits knew the Constitution well, they would not have turned up when the President made an illegal directive.

Moreover, just 5m away from the bunge, Joel and John, two cobblers and shoe shiners at the market say these public forums need to be more open so they are aware of them and participate since they are always in the dark. They did not know about the public forum that bunge members attended yet they need a shed for their work as their previous attempt to lobby the MCA were unsuccessful. It is a striking comment, a contrast from those, just nearby who are in the know.

Perhaps this bunge, when further decentralized to the whole of Molo and Nakuru County in general is the answer to perennial violent conflicts that kills many and leave families destitute.