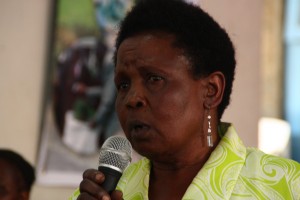 Mary Adagala makes a point during the Friday event in which Ruto expressed his dissatisfaction with the conduct of MP Gikaria.

Nakuru County Governor Joseph Ruto is unhappy with the conduct of the Nakuru Town East Member of Parliament (MP) David Gikaria on his involvement on the affairs of hawkers in the County. Gikaria has been at logger heads with the county administration for months now since a process to relocate hawkers from the town center commenced at the start of this year.

In what the Kinuthia Mbugua led administration has been describing as attempts to reorganize the town, hawkers have continuously been resettled in formal sheds erected in different regions from the town’s main streets.

But this has not been going down well with the MP who is also commonly referred to as TM (Team Manager). Gikaria has in several occasions opposed the relocation and months ago he was involved in a scuffle with administration police officers as he tried to oppose the process.

And last week, the MP who is a former Mayor for Nakuru is alleged to have been involved in another scuffle in which a section of hawkers countered the demolition of their informal structures by county officers where several of the county officers were injured.

Although Gikaria has since denied his involvement in the scuffle it is reported that a legal process is being instituted against him.

Last Friday as the county met to take stoke of the process of devolution the Deputy Governor indirectly hit at the MP saying the county administration would not relent in its plans on reorganizing the town.

“We respect the informal sector but we must do things in an orderly manner,” said Ruto who was representing Governor Mbugua in the event.

He warned traders against settling in plots in the town without consulting the county administration.

“If any trader does so we will destroy the stand,” he said his face with a twinge of anger in his voice.

His decree was however met with murmurs of lack of satisfaction In the manner in which the county administration has been issuing out alternative business stands to the displaced hawkers and other interested business people.
A section of the residents accused the committee involved of discrimination.

“The committee is selling the kiosks,” a section of residents attending the event shouted.

“Women and youth are being discriminated,”

observed a resident Mary Adagala a vocal opinion leader in the county. But the Deputy Governor called the residents to report the discrimination they face from the committee at the Governor’s office to which they shouted

“it is hard to see the Governor.”

Johnson Ndichu one of the leaders of the traders asked the administration to push for dialogue in handling the issuing of the stands.

Gikaria is not new with court cases and even if the County Government manages in staring a legal process against him for his latest alleged misconduct, the court case may be the least of processes to make him go soft on his stand on the hawkers relocation from the town.