Pressure mounts on Makueni Speaker and MCAs to step aside Makueni Senator Mutula Kilonzo Jnr.The senator has asked Speaker Stephen Ngelu and MCAs in the list of shame to step aside
Photo:Facebook

Pressure has continued to pile on Makueni County Speaker Stephen Ngelu and six Members of the County Assembly (MCAs) whose names appeared in the infamous list of shame to step aside and pave way for investigations. 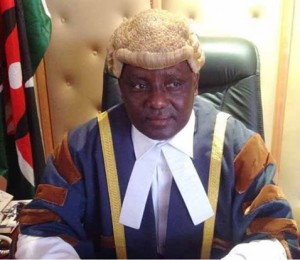 Speaker Ngelu and Assembly Clerk Edward Libendi are accused of colluding with the MCAs to pay them full per diem of close to Sh390, 000 each.

Others are Acting County secretary Rael Muthoka and Procurement Officer Alex Mutuku accused of flouting procurement procures of a diary project at Kikima.

Speaking recently during a tour in Mavindini, the senator wondered why the MCAs claimed a per diem after the fully paid trip by MP Musimba.

“You cannot go on an all expense trip to Dubai and claim a refund from the public coffers,” he said.

“For their names to be cleared, they should first step aside to create room for investigations, but if found guilty they should be arrested,” added the senator.

Makueni Parish Father- in- Charge Fr. Paul Munguti has also asked those adversely mentioned in corruption to step down.

Fr. Paul said residents do not have confidence with leaders whose names made it to the infamous list of shame.

“We cannot trust anyone who has been involved in corrupt deals to protect our resources let them go home, the law is very clear,”said Fr,Munguti during a requiem mass on Sunday.

However, Speaker Ngelu and the others are yet to resign. Ngelu has said that he will not step aside terming the allegations as false.

While his deputy, Musau has said there is no need to resign as investigations in their case are complete.

“Why would I step aside and the EACC has already finished investigations?” he posed.

Makueni residents on social media have supported the renewed calls by the two leaders and now want those who have not stepped aside to do so.

Whether the leaders will bow to the mounting pressure and step aside, only time will tell.