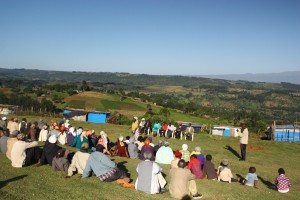 Internally displaced persons (IDPs) at a camp in Nyandarua. More than 600,000 person were displaced during the 2007 post election violence. The xenophobic attacks in South Africa can also be compared to Kenya’s PEV (Photo/Munyakei)

In the first part of this blog I wrote about Eric Ouma. In this second part I write about how Elizabeth was raped during the PEV. But more to that how she had her vaginal opening slit with a panga as her attackers said it was ‘small’ for them to penetrate.

Her story is also told in the CIPEV report and I retell it in this blog as I argue that so many Kenyans were ‘punished’ during the PEV for what they could not change. This is what is happening in South Africa. The ‘foreigners’ are being punished for having a certain identity which they can’t change. For long they lived with their South African hosts without much ado until recently.

Gender based violence related crimes formed a big chunk of the crimes that were committed during the post election violence (PEV) of 2007/2008.

In Nakuru there were men who were forcefully circumcised while in Kibera there were others who were sodomized. The intention was of course to make them feel as lesser men. But even so, so many women were raped in the various parts which were hard hit by the violence.

Philip, a Kibera resident who once told me about the sodomy cases in his area, also told me about how their women were infected with HIV-AIDS after being raped and how in turn the women infected them (the husbands).

Philip is a case study. His wife was raped and she infected him. She has since died and he is living positively.

So there are so many cases, and they have been recorded. But I just wish to reflect on the case of one Elizabeth W.
Her story was recorded by the commission that investigated the post election violence (CIPEV), commonly known as the Waki Commission. It is on pages 94-95.

Elizabeth was attacked at Eldama Ravine where she had a shop on new year celebrations of 2008.

“We didn’t open our business. I worked at the Eldama Ravine shopping centre at Mama Faith’s Shop. It was just next to my house – they are joined together. But I stayed at home that day because I was scared.”

She was with her husband as their children had gone to Nyandarua to visit their grandparents when a group of 10 armed men attacked them at around 3 p.m.

“They were dressed in coats and they had smeared mud on their faces so you could not recognize them.”

She recounted that she heard them say they had come to finish them, minutes before they descended on her husband and killed him, on the spot.

When the attackers were sure they were done with her husband – but before he breathed his last – they turned on her.

“One of the men came towards me and asked me what I wanted to be done to me. I asked them not to kill me. One said we need to know what she is like, now that she never talks to us.”

“I was wearing trousers with buttons at the waist. The men tore at my trousers trying to get them open and the buttons came off. They lifted me up and put me on the ground.”

“They were arguing among themselves who was going to be first. Then one said that if I escaped from the knife and arrows, I would die of AIDS. Some of them held my legs and some held my hands while they raped me.

“one man raped me and then the second one and the third. They put their penises in my vagina.”

“it was either the second or the third man who said they were not able to get in me properly.”

And here they did to her what has never been heard of before.

“So they cut me. I think it was the panga they were carrying that they used. They cut my vagina.”

And then they went on, the bloody pile of her husband lying a stretch away.

“They continued raping me. It was when the fourth man was raping me that I went unconscious.”

Elizabeth told the commission that was her nature.

“When I had my children, the Doctor told me I had a narrow opening. Both my children were born by cesarean.”

I still can’t understand how a man can slit open the vaginal opening of a woman, let alone with a panga, and continue raping her as she is bleeding. Even if it was because of the mob psychology of the moment that was. Some things are just difficult to imagine.

And the pain they caused her in the ordeal is killing to imagine as well.

But perhaps one of the best lessons that this account teaches us is that, like Elizabeth, so many other Kenyans were ‘punished’ during the PEV for being who they are. That is for being nothing but what and how God had made them.

Elizabeth for instance did not ask God for what she was. Her husband had not asked God for the tribe he was that cost him his life. And the list is endless.

Yet such cases make you want to ask for justice, irrespective of wherever it may come from, for Elizabeth, for her husband, and for many more others…