Martha Karua to the army: keep off politics 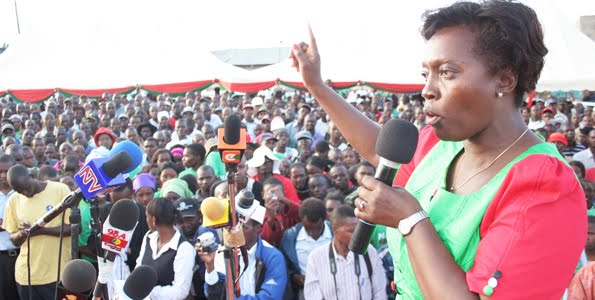 Martha Karua addresses a rally during her bid for the presidency in 2013. (Photo/ www.thelondoneveningpost.com)

Former presidential candidate Martha Karua has warned Kenya’s army and intelligence units not to interfere with the country’s politics and instead focus on making the country safe. Karua, who vied for the presidency on a NARC-Kenya ticket in the 2013 elections, made the comments during a forum held at the Hilton Hotel on Tuesday, headlined ““Rethinking Election Management in Kenya.”

Karua: The intelligence & military MUST stop meddling in the political process. They should be busy keeping us safe. #RethinkingElectionsKE

Karua: Military & intelligence have become a feature in all political spaces. They should not meddle in politics. #RethinkingElectionsKE — Maskani Ya Taifa (@Maskani254) April 22, 2015

Karua’s warning to the army and intelligence wings comes in the wake of news that a Kenyan intelligence officer was arrested in The Hague last week for trying to “interfere” with an ICC witness. Deputy President William Ruto is currently on trial at the ICC for charges stemming from the post election violence witnessed in Kenya in late 2007 and early 2008.

The NIS being used to intimidate ICC witnesses at the Hague, rather than grapple with terrorism. Woi Kenya: http://t.co/Cw2X3Y2ZT9 — Ory Okolloh Mwangi (@kenyanpundit) April 21, 2015

Kenya’s Interior Ministry has denied the reports saying the intelligence officer never stepped foot outside the airport in The Hague. Spokesman Mwenda Njoka has demanded that the Daily Nation, the paper that first reported the story, issue a full unreserved apology.

Govt of Kenya says the arrest of the NIS officer in the #Netherlands isn’t linked to any case at the #ICC, he was going to #Germany — JFJustice (@JFJustice) April 22, 2015

Hon. Karua’s comments were informed by the increasing militarization of the security agencies. In the two years that the jubilee government has been in power, various core functions of government have been headed by people from the military. Karua remarked that this trend started at the Bomas of Kenya, the national tallying center for the 2013 General Elections, where she remarked that the intelligence and military officers at the facility was unprecedented.

Some of the key military men who have been appointed included Retired Major General Gordon Kihalangwa earlier appointed to head the department of Immigration, but has since been nominated as the next Interior Principal Secretary. Retired Major-Gen Joff Otieno was appointed Kenya’s Ambassador to Cairo. Retired Major Joseph Nkaissery was appointed Cabinet Secretary for Interior, among others. Such appointments are unprecedented in Kenya.

Tuesday’s forum was held to access the IEBC’s and Supreme Court of Kenya’s performance in 2013 and how Kenya can recalibrate both institutions for more transparent election in 2017. During yesterday’s session Karua also talked up the issue of election offences saying it should attract more consequences for it to be stopped.

KARUA: Its so easy to commit election offences since no one follows up #RethinkingElectionsKE @MarthaKarua