Nakuru residents to laugh at themselves at the Jukumu Letu launch

The puppets that will be showing the conflicts in the county between Governor Mbugua and hawkers and among MCA’s (Photo/Kioko).

Nakuru residents will be reflecting at the issues that concern them most today at the Jukumu Letu campaign launch.

The event will take place at the Nyayo gardens and is free for all. There will be performances from various art groups among them cartoonists and musicians. But it’s the nature of the performances that will leave the residents laughing at themselves as they reflect on the issues.

A puppetry performance will be ‘laughing’ at the resent fights among Members of the County Assembly (MCA’s) that saw President Uhuru Kenyatta form a committee to investigate the squabble.

The performance also enacts the removal of hawkers from the center of town that has seen the Governor Kinuthia Mbugua administration rub shoulders the wrong way with the hawkers. In the performance question questions are raised on the validity of the exercise which has been said to be aimed at ‘cleaning’ the town so as to reclaim Nakuru’s ‘lost glory’.

Other artistic expressions that are bound to attract citizens are cartoons that have been drawn by a group of four cartoonists led by veteran and celebrated cartoonist James Kamawira aka Kham.

Led by Kham the cartoonist will showcase different cartoons on the problems afflicting residents.

The different cartoons show the various issues that the county is facing including corruption, drug abuse and misuse of public offices.
Kham has told Kenya Monitor that they discussed that the issues they have identified in the cartoons are real.

“We discussed the issues affecting the county. This is what informed the work.”

Commenting on the work a Kericho based artist Kimani wa Wanjiru said what made the cartoons stand out was the fact that they had multiple interpretations.

Other key performances will be from the Dance into Space and Sarabi Band, all of which have trained local artists in bringing out the issues affecting the county through dance and music. 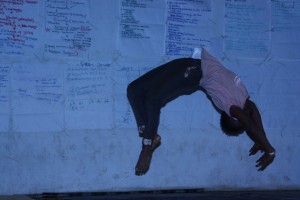 A Dance into Space artist during rehearsal at the Nakuru Players theatre. The dancers will also perform at the launch (Photo/Kioko).

Dance into Space will do a rendition of dance and poetry which laughs at the issues. Within the dance they will also act scenes of corruption.

Mandela of Sarabi Band will be leading the musicians in today’s performances (Photo/Kioko).

Sarabi Band will do songs calling on citizen participation that aims to keep devolution on track.

“One plus one is equal to two, I need you and we can bring the change we need,” says a verse of one of the songs.

All these performances are what one would describe as art that ‘tells the truth laughingly’.