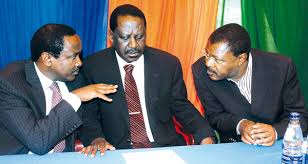 CORD luminaries Raila Odinga,Kalonzo Musyoka and Moses Wetangula.
Kalonzo and Wetangula has said dissolution of Makueni should be the last option
Photo:Kenya Today

Former Vice president Kalonzo Musyoka and FORD Kenya Party leader Moses Wetangula said the two arms of government should try and solve their differences before having the county government dissolved.

“Dissolution of the county should be the last resort,” said Wetangula.

The Bungoma Senator said the Senate will however be awaiting the findings of the Mohammed Nyaoga -led commission for deliberation.

“Let the residents give their views to the inquiry, we shall wait the findings at the senate for debate,”said Wetangula.

Former Vice President Kalonzo Musyoka said it was a shame that the wrangling between the Governor and MCAs had led the county government to the verge of dissolution and called on the residents to support the governor.

Musyoka described Kibwana as leader of high integrity and accused the MCAs of being misled to impeach the governor a move that he said, heightened the wrangles.

“The MCAs were paid to impeach the governor despite an advisory from the Wiper chairperson David Musila to stop the impeachment,” said the CORD luminary.

The leaders were speaking at Unoa grounds in Wote during a fundraising for Makueni Seventh Day Adventist church.

The inquiry commission has already started public hearings in Makueni at Wote into the possible dissolution of the troubled county.