Curios traders count losses due to declining number of tourists 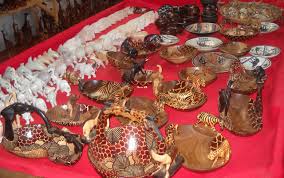 The alarming decline in the number of tourists visiting the country has led to the loss of jobs and income and among those paying the price are Embakasi Village Curios who depend mostly on foreign tourists to sell their products. Situated along Mombasa road near Cabanas Junction and with more than 50 workshops inside, the compound provides job opportunities to many families which earn a living from the making of curios. Embakasi Curios makes various products from local and imported materials. Some of their products include leather made belts; Akala sandals, wood carvings, and beads, as well as fabricated clothes with Kenyan flag colors.

Even though many of the stalls are owned by men, women and youth have not been left behind as they too indulge in weaving Kiondos as well as cloth purses bearing the national flag. The unique features attached to the curios and their fine finish attract many tourists who wish to have them as souvenirs when they visit Kenya. Of late however, the number of tourists has significantly reduced as they fear for their safety due to frequent attacks by Al-Shabaab insurgents.

The security situation has led to a drop in sales of their products and forced some to close down their stalls due to lack of enough capital to purchase raw materials. Atson Nyasimi aged 34 is one among the traders.

“I haven’t attended market in the last two sessions as my previous visit generated little profit. We have designated open places where we market our products since we don’t have a permanent place where one can access our products. On Wednesday, we usually hold our market at Capital Center along Mombasa road, other days at the space on the Supreme Court Buildings,” noted Atson

A simple decorated key-holder made of wood and with one’s name inscribed on it used to sell at sh1000 in 2008 but now retails at sh500. And according to traders, domestic tourists still do not think it is worth that much. On a good market day, Nyasimi would go home with over sh15000 or more but today that amount has reduced drastically.

The fear of attack is causing panic among tourists and dictating where and how long they stay at certain areas. Susan Ryan a tourist from Netherlands says

“I usually make one trip to market but I don’t stay long. I fear for my life,”

perhaps a thought shared by many who haven’t visited the country. With domestic tourism still low in the country as many people are forced to choose between leisure and basic needs, the ripple effect of this decline has even affected hotels forcing them to shutdown and thousands becoming jobless.

However, Embakasi Village Curios has decided to try other strategies in marketing their products. Now they are planning to make brochures with direction and the products they offer then rent a small office at the Jomo Kenyatta International Airport (JKIA). By issuing the brochures and samples of their products to tourists arriving in the country, they hope to stand a better chance of increasing their sales. In addition, those interested will have chance to pass at their workshop on their way to Central Business District (CBD) and choose what pleases them.