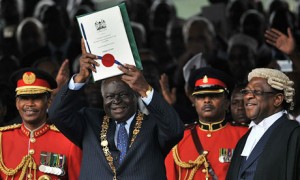 Many Kenyans lost lives, others went to exile while some suffered irreparable damage both financial, socially and politically. Kenyans therefore wanted a document that has fundamental changes to its state and governance structures. At the heart of the constitutional change was the desire to restore sovereignty to the people by identifying them as the basis of all state and public power.

The spirit of these changes is reflected in the national values and aspirations that are identified in the Constitution as including: the rule of law, democracy and participation of the people, human dignity, equity, social justice, sharing and devolution of power, good governance, integrity, transparency, and sustainable development.

The following are key events or milestones that accrued ‘anger’ in Kenyans wanting a new supreme law. They were contained in the interim report of the working group on socio-economic audit of the Constitution of Kenya 2010

1982: Repeal of Section 2A of the Constitution. This repeal officially made Kenya a one party state and ushered in a one party state. It also ushered limitation of political options to one party; KANU.

1985-1988: End of cold war. Global geo-political changes resulted in the end of the cold war. There was also the fall of Berlin wall and the collapse of the Soviet Union resulted in a wind of change that swept across Africa. Locally, it triggered increased constitutional reform agitation, with disaffection on the one party dictatorship reaching fever pitch in which the key players included the church, civil society and political pressure groups.

1990: Saba Saba Riots. Political pressure groups led by Matiba, Rubia and Raila declared for the holding of Saba Saba meeting on July 7 1990. The Saba Saba rally is attributed to the political murders of Robert Ouko and Bishop Alexander Muge. The death of Bishop Muge can be directly attributed to his incessant demand for constitutional reforms and multi-partyism. The resultant arrests of the leaders, riots and deaths played a key role in the clamour for multi-partyism and constitutional reforms.

1990-91: The Saitoti Review Committee. The committee was tasked with investigating KANU‘s internal electoral and disciplinary conduct. It recommended cessation of party members‘ expulsion but instead sought short suspension. It also opened the doors for political reforms, more critically, setting the stage for the return of multi-partyism.

1991: Tribal clashes and heightened pressure and Increased number of players. The politically motivated tribal clashes drew condemnation and heightened demand for constitutional reform. Violence was seen as government‘s attempt to forestall clamour for multi-partyism and constitutional change. The twentieth sixth Amendment, Act No. 10 of 1991 increased the number of constituencies to a minimum of 188 and a maximum of 210, without any input
whatsoever of the ECK. Resulted in the joining of forces by NGOs, religious and secular organisations and political pressure groups to fight the KANU onslaught on constitutionalism. Key players included, NCCK, Episcopal Conference of Catholic priests, LSK, ICJ (K), KHRC and FORD. Foreign ambassadors further weighed in, most notably the then American ambassador Smith Hempstone, adding their voice to the reform clamour.

1991: Restoration of multi-partyism. The 27th Amendment, Act No. 12 of 1991 restored Kenya as a multi-party state and restricted presidential term to two five-year terms. Democratic space was therefore opened up and thus emboldening the pro-reform brigade.

1997: The IPPG Initiative. It established through the Constitution of Kenya (Amendment) Act No. 9 of 1997. The number of ECK commissioners rose from 12 to 22, where the opposition parties would nominate 10. The nomination of MPs was pegged on the parties‘ strength. In addition, the Constitution was amended to officially state that Kenya was a multi-party State.

1998 – 2000: Constitution of Kenya Review Commission Act. It was enacted to oversee the review process. The review process was spearheaded by the PSC chaired by Raila Odinga. The clergy withdrew from the process and formed their own review process dubbed Ufungamano Review Initiative. Ufungamano published the – People‘s Draft‘.

2001 – 20012: Constitution of Kenya Review Commission. It was formed to spearhead the review process and headed by Prof Yash Pal Ghai. There was the merger of the CKRC and Ufungamano Initiative. It birthed the collection of views by CKRC and preparation of a new Constitution draft. There was also convening of a delegates‘ conference to debate and ratify the draft but the conference aborts due to parliament‘s dissolution.

2003 – 2004: BOMAs Delegates Conference. The NARC victory quickly ushered in convening of the BOMAs talks.  The CKRC draft of 2002 formed the basis of the talks. Political fallout in NARC spilled over to the BOMAs process. It led to a defeat of the government side where the draft was approved by delegates.

2005: Kilifi Draft. Kenya held a referendum in 2005. The then Attorney General Amos Wako prepares the Kilifi draft using the BOMAs draft as a basis. The Kilifi/Wako draft subjected to the referendum and it is defeated through a popular vote in August 2005.

2006: Kiplagat-led Committee of Eminent Persons. It was a Multi Sectoral Review Forum tasked with collecting public views on how to move the process forward. The Constitution of Kenya Review Bill drafted to jump start review process. It bore no results before the 2007 General Elections.

2008: National Accord and Reconciliation Agreement. This birthed Agenda Four. Several legislations were made including the Constitution of Kenya (Amendment) Act, 2008 and the Constitution of Kenya Review Act, 2008. This was due to the Post-election violence resulting from disputed presidential elections. It led to the signing of a National Accord Agreement providing under Agenda Four the need to institute Constitutional Review as a long term peace solution. There was also the enactment of the Constitution Review Act establishing the Committee of Experts to spearhead the review process. PSC, National Assembly & Referendum were the three other critical organs in the process as outlined by the Act. COE prepared a Harmonized draft Constitution and a Report from the previous drafts: CKRC draft, BOMAs draft & Wako draft. The harmonized draft made public for debate.

2009: Revised Harmonized Draft. COE collected public views on the harmonized draft as well views from all public interest groups. COE incorporated amendments in line with the collected views and produces the RHDC accompanied with a report.

2010: Revised Harmonized Draft after PSC Naivasha meeting. The PSC retreated to Naivasha to consider the RHDC and made significant recommendations. COE considered the recommendations albeit not incorporating all the proposals. A new revised draft presented to parliament for debate and consideration. The draft was approved without amendment.