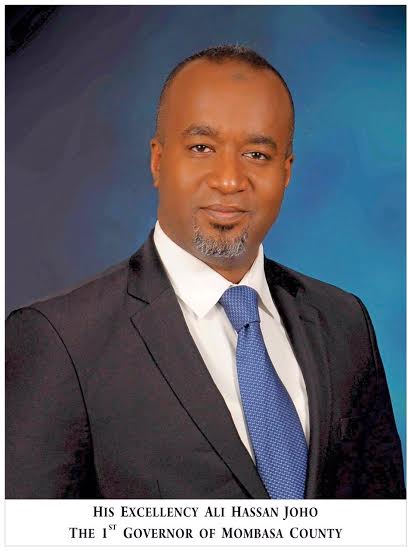 Business owners in Mombasa, have one additional requirement if a new law passed by the county assembly is signed. All businesses will be required to display a portrait of Governor Joho in their business premises. The motion was brought forth by MCA of Mjambere ward ostensibly to help create unity and patriotism in the county among residents.

According to the MCA, the law will create respect for the office of the governor among the residents of Mombasa county.  This additional requirement burdens the county residents and there are questions as to how such a law would be enforced and what would be the penalties of going against the law. This news was met with shock and angst among Mombasa residents who are grappling with a myriad of problems among them a poorly equipped hospital, broken drainage system and worsening road infrastructure among other challenges.

Seriously Joho passed a law to have his portrait displayed on business premises? HAHAHAHAHAHA

Most social media users chose to ridicule the bizarre laws, which will become the first of its kind in Kenya once enacted. It’s constitutionality will be up for debate no doubt, but Mombasa residents are looking at this matter keenly.

Catherine a business owner says the rule shows that the county government has given up on making meaningful change for the residents and is now engaging in sideshows that have little meaning to the wananchi.

“So does that mean I will be arrested by the County Askaris because I don’t have the governors portrait? Why does that matter more than improving life for us?”

she asks animatedly pointing to stagnant greenish sludge outside here shop in Bamburi.

However, the governors supporters came out strongly to defend the move saying that after all, even the presidents portrait is displayed in business premises. Most argued that Mombasa county had authority to make laws it deemed suitable without the central government meddling in.

However, in a swift rejoinder the governor has issued a statement denouncing the law. In the statement, he urged members of the county assembly to focus on legislation that benefits the residents of Mombasa. This again brings into focus the role of MCA’s in the county government if such a motion was proposed, discussed and passed.