Blogging and social media use in Kenya growing, says report 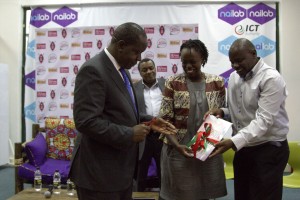 Bloggers in Kenya have had, in several instances, to ‘save’ their credibility and explain a few things including the doubts and the notion that they are just but social media trouble makers who will write about anything sensational and vulgar.

But today, bloggers and other online content creators are being appreciated not only by the fellow internet users but also by corporates.

According to a new report titled ‘The State of Blogging & Social Media in Kenya 2015 Report’ launched by the ICT Cabinet Secretary Fred Matiang’i points to a new shift in the way bloggers are being viewed in Kenya, and their impact in the development of digital content in Kenya.

The report was done by the Bloggers Association of Kenya, and supported by Hivos Foundation. The report highlights that blogging is slowly becoming a viable business for many young people who cannot easily access jobs elsewhere.

Today, more Kenyans can embrace citizen journalism and write articles or publish content that would otherwise not be accepted in the mainstream and traditional media. The report notes:

“Blogs are becoming a tool for whistle blowers to employ on exposing corruption and misappropriation of public funds. Kenyan blogger Abraham Mutai was in January 2015 detained in police custody for questioning and later released for exposing corruption in the Isiolo County through his blog and then tweeting about it.”

Since 2003 when the first blog was established in Kenya, the country’s blogosphere has grown tremendously to accommodate the fast growing internet users. According the Bloggers Association of Kenya Chairman Kennedy Kachwanya, there is an estimated 15,000 registered blogs in Kenya with 3,000 being active blogs registered blogs by Kenyans on the WordPress, Blogger and Tumblr platforms.

This report seeks to vindicate our concerns as BAKE on the increasing cases of prosecution, intimidation and concerted efforts to discourage dissident Kenyan voices on social media.

Besides showing the role that Kenyan bloggers have played and continue to play in the promotion of free speech in Kenya, the report also seeks to highlight the contribution of the bloggers in the creation of diverse content on the internet. 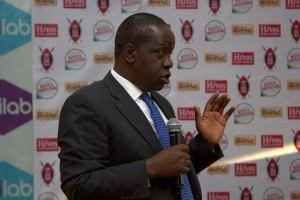 Fred Matiang’i, Cabinet Secretary for ICT at the launch

Speaking during the launch of the report, the Cabinet Secretary in the Ministry of Information, Communication and Technlogy Fred Matiang’i admitted that the time is now for all stakeholders, including the government to embrace digital media.

“We are in the era of citizen journalism and as the government; we must put most of our advertisements online. Today, the reach of the digital content is four times more than that of print media,” said the CS.

Matiang’i said that it was not the intention of the government to harass anyone online, adding:

“We are not that autocratic regime that will wake up one morning and shut down the internet. Let us bring a sense of culture that will create a value system and shape morals in the social media space.”

ICT Authority Chief Executive Officer Victor Kyalo echoed his words, saying that the government had no choice but to go the digital way.

“As a government, we do not have a choice but to go digital. Service delivery in Kenya is no longer analogue,” said Kyalo.

Michael Greenwald the Public Affairs Officer at the US Embassy in Nairobi recognized the role that bloggers play in promoting democracy. He said:

“Bloggers play a huge and important role in democracy, the US Embassy is happy with our continued partnership with BAKE.”

The launch was attended by, among others, officials from the Ministry of ICT, Kenya ICT Authority, Media Council of Kenya, dignitaries from the Norwegian, US and Dutch Embassies in Kenya, civil society, activists, bloggers and social media influencers.

According to Njeri Wangari, director, training & outreach at BAKE, the report was the first annual report and that BAKE would be releasing a similar report in the month of June every year.

There was also a panel discussion at the launch that gave the attendees a chance to deliberate on the issues affecting blogging and bloggers in Kenya. Among the panelists were: Kenyan Award winning Photo Journalist Boniface Mwangi, Advocate Mugambi Laibuta, ICT Authority CEO Victor Kyallo, Ushahidi Director Daudi Were and Njeri Wangari.