I use road lights to light my home, says Machakos resident 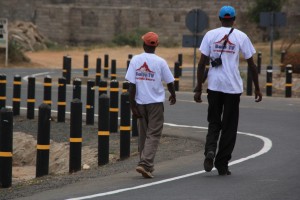 The Makutano-Kithimani road in Machakos County that was constructed in 3 months. A resident said he uses the light mounted along the road to light his home (Photo/Kioko).

Most residents of Machakos County who ply the Makutano-Kithimani road are happy with the County Government of Machakos for the renovation of the road.

Although there has been talk in the country that the 33 kilometer road that was constructed in a record 3 months may be substandard, the residents are happy that the road is at least tarmacked. This they say is a promise they had heard for long from previous regimes without having it fulfilled.

Among those who are grateful for the construction of the road is a 26 year man who works as a tout along the road. While Abdala Riziki Munyao appreciates that the new and ‘modern’ road has made transportation easy he says that it has added modernity in his life.

“I stay close to the road and I usually use the road’s lights at my home,”

says the father of two who spoke to Kenya Monitor several meters from the Makutano junction.

“I don’t even buy paraffin sometimes,”

said the young man who resides at Kilaani.

Besides Munyao who finds use in the road’s light at his home free of charge, other residents said since the renovation of the road early this year, transports costs have gone down.

“Initially we would spend at least sh50 to transport goods from Kithimani, now we use sh20,”

A section of Makutano-Kithimani road. Residents say since it was constructed transport has been efficient (Photo/Kioko).

The residents also say the time they spend less time to travel on the road.

said Abednego Mwanzia a bodaboda operator along the road.

“My bodaboda does not also break all the time as before. Its more secure to ride with customers.”

Residents also say due to the renovation, matatu operators have found it has introduced new vehicles along the road. It is partly because of this they will hear nothing about the talk of the road being substandard.

“Those are fake propaganda. People have been in government and did nothing,”

said David Njatha a business man who feels the road is good enough.

“Better is the one who gives you githeri than the one who promises you ugali that is nowhere to be seen,” he added.

In addition to the road construction project, the county government of Machakos under the leadership of Dr. Alfred Mutua has launched several impressive and notable projects that have been well received by residents. Among these is the establishment of the Machakos People Park which is a one stop recreational facility.

The residents want the county government to do even more.

“We want the Governor to build more roads,”

said Lazarus Njagi while Fr. Peter Wambua, a Catholic Priest at Thatha parish wants the government to tighten security by increasing the number of police cars doing surveillance in the county.