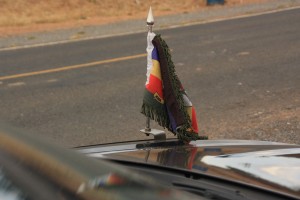 A flag on an official car used by a CEC in Machakos county. The flags bear the message “one finger cannot kill a lice” (Photo/Kioko).

All County Executive Committee (CEC) members in Machakos county (the equivalent of Cabinet Secretaries in the national government) fly flags on their official cars. The flags which bear their county’s logo have a harambee message on them that says one finger cannot kill a lice. The message is written in kikamba perhaps to reach the residents directly. So it reads

Besides this, none of the CEC’s offices are housed under the same roof with Dr. Mutua. Each of them has offices where they are needed most. For instance the CEC in charge of Health is housed at the Machakos Level Five hospital. In fact even the Deputy Governor Bernard Kiala does not have an office space at Dr. Mutua’s office which is situated in the outskirts of the town on Kitui-Machakos road.

“This is our State House,”

the officer said adding that instead of coming to ‘idle’ at the Governor’s office they have found it wise to concentrate on their mandates. This as it is, is the Machakos way of ensuring efficiency and service delivery to the residents.

At the Governor’s office there a stark reminder of what the county dreams of; presented in a plan of a modern city whose construction the Governor will start soon. Again most of the people who work at the office are young, good looking, and they waste no time with that which does not concern them. Looking at them while on duty one notices they have been trained on delivering on that brand called “The Machakos County.” 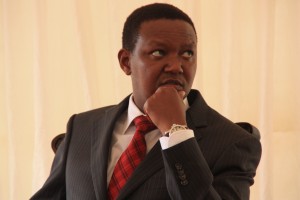 Machakos Governor, Dr. Alfred Mutua. He is working towards changing the image of his county (Photo/Kioko).

But that’s not all. It takes long for residents to give you a ‘negative’ comment about the Governor. Once you introduce yourself as a visitor and ask residents to comment on the state of development at the county they quickly rebound it to you and say,

“si wewe mwenyewe unajionea” (can’t you see for yourself).

I tried this with two different bodaboda riders who took me to and fro the now famous Machakos People Park, and when I got the same response, I gave up. This was after an attempt to get another side of the story of the, again, famous Kithimani-Makutano road failed. Residents I spoke to were all praise about the 33 kilometer road that was constructed in a record 3 months. They said they don’t care much about what their Governor’s “detractors” might say. What they care much is that something was done to ease transport in their region.

Well, these are some of the many outstanding features of Machakos that you get to notice when you visit the county. You get this feeling of team work between the Governor and his people. You feel like there is a common dream and a commitment to fulfill it. And this I think, is what Kenyans were yearning for when they voted for the devolved system – a share in the common dream.

Time will tell whether Dr. Mutua will finally deliver his ambitious plan for his people. But the same time will also tell some day to come, that it costs nothing to dream. Like Eleanor Roosevelt said

“the future belongs to those who believe in the beauty of their dreams.”