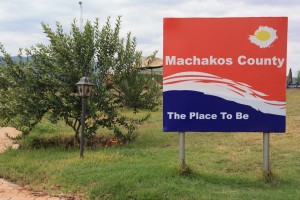 The Machakos people’s park is one of the tourist attraction sites to visit in Machakos County (Photo: Kioko).

After being rated as the best Governor in Kenya, Machakos Governor Dr. Alfred Mutua is now encouraging other governors to work hard, if not follow his footsteps, to spur development in their respective counties.

Mutua, a professional journalist who worked as a government spokesperson in the previous government believes with dedication and change of political ideology Kenya can transform into a first class economy.

“If we pull together as a country, we can become the first world country we want to be,”

Mutua told a battery of journalists from several media houses across the country who had visited him last weekend to assess the state of devolution in his county.

Mutua is best known for initiating several development projects in his county within the shortest time. To start with he was the first Governor in the country to constitute his cabinet after Governors were sworn into office in April 2013. A few months ago he made history for constructing a 33 kilometer road in 3 months. He is also known for being a pace setter in several other projects including the upgrading of medical services since the county governments took over the running of the sector from the national government. 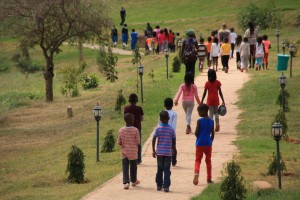 “We want to show the world that what we have done is not magic and that it can happen anywhere in Kenya,” he added.

While comparing Kenya to Singapore, Thailand and Malaysia, Mutua said though Kenya was at the same development status with these countries at the crack of independence these countries, it has lagged behind out of what he sees as destructive politics.

“We need to ask ourselves where we want to go. There is no reason why we should be poor. I am convinced that with the resources we have in this country, we can transform it to be the best.”

To get to where we want to he said we have to change our attitude and political ideology giving example of his ‘maendeleo chap chap’ slogan.

“Maendeleo cahap chap is an ideology for politics of development,” he said.

Mutua believes there is also need to act fast on delivering the election pledges that politicians make during campaigns.

“Speed is not inimical to efficiency. It is in contradiction to efficiency. Saying that by doing things slowly you do them better is a bad mentality. Here (Machakos) we say do things fast.”

In saying so Mutua was referring to the 33 kilometer which he managed to construct in 3 months after giving the contract to 11 contractors all of whom worked on 3 kilometers. He is also said to have renovated the Machakos level 5 hospital using the same philosophy of getting as many contractors as possible who in this case worked day and night.

Overall he feels there is need to counter what he sees as a practice among Kenyans of being content with average performance.

“We need to deal with the minimalistic mentality,” he said.