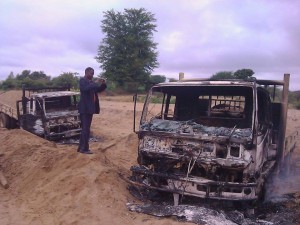 Area Police Boss Muturi Mbogo said the trucks, in a convoy of four had sneaked to the river to scoop sand when area residents waylaid them and set ablaze two of the trucks. Mbogo said the drivers managed to escape while the other two trucks sped off before they could be caught up in the melee. No casualties were reported.

The police boss warned sand harvesters against scooping sand without permit and also cautioned residents against taking the law in their hands.

He said no arrests have been made so far but, disclosed that police have launched investigations into the incident and promised to bring to book those found culpable.

Incidents of lorries torched while harvesting sand in Kasikeu are not new. Last year several lorries were set ablaze after residents impounded them while ferrying sand.

Despite the Sand Harvesting Act that was passed by the Makueni County Assembly early this year cases of illegal sand harvesting are rampant as the new act is yet to be effected due to lack of proper structural frameworks.

Director Water and Environment Joseph Munyao told Kenya Monitor that according to the new act, a sand harvesting management authority that is mandated to regulate the activity has not been constituted.

Governor Kivutha Kibwana banned sand harvesting immediately he took office in 2013 and according to Munyao it is still not clear whether the ban or the law is in effect.

Despite the ban, the activity continued unabated particularly in Kasikeu and Kibwezi. Consequently the county government efforts to form an enforcement unit to curb the menace has not borne much fruits as the officers are outnumbered and threatened by the sand loaders and harvesters.

Illegal sand harvesting has had devastating effects. Several people have lost lives in the fight against the activity while many rivers, which act as main sources of water, have dried.

Kikuo Water Resources and Users Association (WRUA) Antony Mutua says with the environmental degradation residents are forced to walk for long distances in search of water for both domestic and livestock use.

While the sand harvesters rake in millions of money from the activity, (a lorry goes for between Sh40, 000 and Sh60, 000 in Nairobi or Mlolongo) residents and especially unemployed youth who act as loaders continue to languish in poverty. The youths are paid a paltry sh400 per lorry.

With this worrying trend, perhaps its time that the national and county government collaborate to fight the menace and implement the new enacted sand act to prevent further wanton destruction of environment and property.