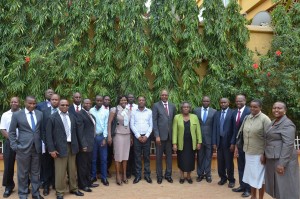 Taita Taveta’s County Land Management Board (CLMB) was sworn-in in an event presided by Justice Edward Mureithi and in the presence of H.E the Governor, Eng. John Mruttu and H.E the Deputy Governor, Mary Ndiga Kibuka.

Speaking shortly after the swearing in ceremony, Governor Mruttu expressed confidence in the board noting that its composition encompasses the right mixture to handle the full in-tray before it.

“The composition of this board-encompassing youth, women and seniors is the correct recipe that will add impetus in solving land issues in the County. I therefore have all the confidence based on the passion, energy, experience and credentials exhibited in this board that it will meet the expectations” stated Eng. Mruttu.

He also lauded the swiftness of the board in making decisions an ingredient he termed very necessary in discharging their mandate.

“I am impressed with how steadfast you were in deciding who’s going to be the Chairman. In no time you were able to deliberate and present your Chairman something that is not easy in many parts of the Country. I want to challenge you to keep up that steadfastness acknowledging the fact that you have a legal mandate to dispense and to the expectation of the public that we serve”.

Speaking in the same event, the Deputy Governor acknowledged the seriousness of the tasks that lie ahead of the board and promised to support it as her-led docket continues to make strides in matters land. She said:

“We know the daunting task that lies ahead of you and as the County Executive Committee Member in charge of Lands and Mining I can assure you of support to execute your mandate expeditiously”.

On his part, the National Land Commission’s Deputy Director of Human Resource, Mr. Andrew Okwach thanked the County Government for operationalizing the board terming the move as satisfying the constitution and the national land policy.

He also expressed his optimism that cases of grabbing public or community land will be put to rest with the board now in place.

“With you (CLMB) on the ground we don’t expect to hear any cases of public/community land being grabbed and if it happens under your eyes then we’ll simply say you’ve sold it” he said.

CLMB Chairman, Mr. Nesphory Nyange assured the public that the Board will discharge its mandate fully and impartially as expected of them.

The board was later briefed on current situation of land issues in the County by the Deputy Governor and who’s also the C.E.C.M of Lands and Mining.