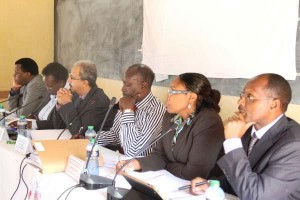 Fate of Makueni County dissolution to be known today

The fate of the dissolution of Makueni County will be known today when the commission looking into the petition to suspend the County Government will hand over its report to President Uhuru Kenyatta.

The Mohammed Nyaoga- led commission is expected to present its findings and recommendations on the wrangling between Governor Kivutha Kibwana and Members of the County Assembly that prompted more than 50,000 residents to petition the president to suspend the county.

In their petition, the residents had argued that the protracted infighting between the two arms of government had paralyzed operations in the county and that dissolution was the only solution to end the impasse.

Under article 192 of the Constitution, the President may suspend a county in an emergency arising out of internal conflict or war or any other exceptional circumstances.

While presenting their views to the commission, 94 percent of residents rooted for dissolution and if the commission grants the residents’ prayers Makueni will go in history as the first county to be dissolved under the new dispensation of the devolved system of governance.

After receiving the report and upon being satisfied that there exists justifiable reasons to suspend the county President Uhuru will within seven days forward the findings to the Senate. The Senate will also within seven days adopt or reject the report.

However if the Senate adopts the report, the President will suspend the County Government for a period of ninety days though the Senate can at any time terminate the suspension.

During the period of suspension, the Governor, his deputy, members of the executive committee and MCAs will be on half benefits and an interim County Management Board will be appointed to carry out the County Government functions until such a time when the suspension is lifted or elections are held.

The tabling of the report has created anxiety and tension especially county leaders whose fate now hangs in the balance. Reports on social media that the commission has recommended for the suspension of the county has continued to elicit mixed reactions.

Already Governor Kivutha has taken to social media to state that his government will accept the verdict of the commission.

“When our lawyer made his final submissions to the Nyaoga commission he stated that the county government submits itself to the mercy of the people of Makueni and the Senate. The People of Kenya are sovereign according to Article One of the Constitution. Let us all accept the verdict of the commission.Whatever the verdict our people have proved to themselves worthy defenders of devolution.They have made history.”

Residents of Makueni on Facebook also expressed their varied opinions.