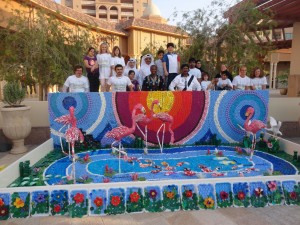 Zacchaeus with a team from Qatar pose behind a mural in the city of Doha. Photo: Zacchaeus N Jairus

When in a foreign land, there is nothing as assuring as hearing a tongue you can relate to.

And when Nelson Mandela said,

that was true.
It was when waiting for a connection flight at Dubai Airport coming home that I met Zacchaeus Njuguna Jairus. I’d been away for a month and with the hustle of conferences, new people and changed time zones, a familiar tongue can be so assuring.

The reason I was attracted to him was, of course, the language and my curiosity to understand some murals he had. When I spoke with him, I realized he was a Kenyan to the core and making a difference in a country where cultures melt.

On talking more, Zacchaeus told me he comes from Kirenga Location, Lari Constituency Kiambu County, where I also come from. From then, a bond was created.

“I landed in Qatar in May 2011 and the challenges then were homesickness as being away from the family sometimes creates loneliness. Since I work under a contract, my vacation was after two years when the company pays for you air ticket.”

Zacchaeus adds that the cost of living was a major concern as starting a new life was hard.

“For the first year I struggled. Then, as the saying goes that when in Rome do as the Romans do, it was a big challenge to adapt to the culture. Imagine my shock when I realized that the weekend was on Friday and Saturday and Sunday was a normal working day!” he exclaimed.

He adds that climate in the region was totally different and in summer, it would get very hot while during winter it would be extremely cold.

On what he does and which is what caught my attention at the airport, Zacchaeus says he volunteers a lot. Before leaving Kenya, he worked with the Kenya Red Cross. 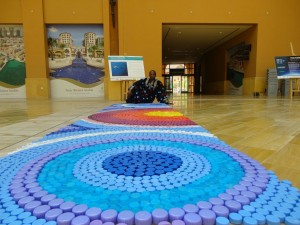 Zacchaeus with one of his murals in Doha. Photo: Zacchaeus N Jairus

“I use bottle caps to draw murals, polythene bags to make balls and newspapers to make ‘Green Books’. All this is under ‘Reuse, Reduce and Recycle’-the 3Rs of conservation. I volunteer most of the weekends to enlighten the community on the importance of taking care of the environment which keeps me busy most of the time. It helps keep my mind away from homesickness,” he adds.

“‘Ku-hustle’ in our country in the name of Kibarua. I needed to get good capital to start a business that could create jobs for others and to maintain our family.”

“When I got to Qatar, I joined the Qatar Voluntary Centre where I met with people who had the same ambitions like mine. We started attending different events like environmental fairs where I got all the connections. I started sharing more about our country’s tourism, the environment and education. Then, I started inviting some of my Kenyan friends and we started a dance troupe where we dressed in Maasai regalia.”

“Wa Masaai became popular in Doha and we started being invited for different events. This helped me launch different environmental conservation voluntary projects like “Turning Waste to Art”. The born again Christian who is a self-proclaimed graduate from ‘University of Nature’ is an environmentalist who would make the late Professor Wangari Maathai proud. He says that his hummingbird act is to do the most he can to conserve the environment wherever he is.

The un-acclaimed tourism ambassador started schooling at Kirenga Nursery School then proceeded to Kirenga Primary before joining Nyamweru High School. He later joined Limuru Skynet Business College. He said that one of the challenges was accessing education.

“Being raised in the rural area was one of the biggest challenges for me which meant not having good access to education. The infrastructure was poor, no electricity and such like issues. In addition, the weather was another challenge as it used to rain too much and it would also get very cold especially in the morning so most of time I used to get sick,” he added.

For now, he says his plan is to market Kenya and present our nation in all ways

“so that I can open the doors for our youths back at home”. “Every time I look at nature, I am inspired by the creation of God starting with small insect and people around me who have different ideas. You can call it eco –inspiration,” he says with a smile.

Zacchaeus says home is the best and that he is coming back to Kenya which is the only “best place for me to be.”

He says before then, home is where his job is and that is why he is a volunteer in the community to leave it better enlightened when it is time to pack his bags.

And as Kenyans commemorated the fourth anniversary of the late Wangari Maathai this past weekend, Zacchaeus, is doing his #mylittlething in his own way. He encourages Kenyans to always care for the environment so it can take care of them in return.