The Role of Women Representatives in Kenya 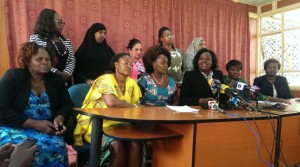 Some of the women legislators in Kenya. Photo courtesy; www.capitalfm.co.ke

While the public perceives them as a different group of legislators, the women representatives are in fact Members of Parliament (MPs) just like the members representing the Constituencies and those in the Senate. It appears that they were elected to balance the gender equation (affirmative action) but their role goes beyond this trajectory.

The position of Women Representatives creates room for more women representatives in the legislature to ensure that not more than two thirds of the members ore of the same gender.

Women Representatives are supposed to primarily promote the interests of women and the girl child within their counties (and by large, nationwide) by coming up with legislation that favors and suits the women and girls within their dominions.

Through legislation, the Women Representatives should lobby and advocate for the rights, freedoms and interests of the women and girls, who are perceived by the society to be the ‘weaker sex’ in order to uplift them to the standard where they are considered at par with their male counterparts.

Women representatives in their legislative capacity are supposed to formulate legislative policies that uplift the social, economic and political status of women and girls in the country. Nevertheless, this advocacy does not necessarily involve advocating for immediate needs for the women and girls, such as sanitary towels and boreholes.

The intention of the position and mandate of the women representatives was for their roles to be long term in addressing the challenges that face the women and girls in this country due to persistent marginalization and neglect by the patriarchal society. This includes ensuring, through legislation and policy formulation, that majority of the female population has a certain level of affordable access to basic needs and wants, rights and freedoms, privileges and protections.

The other roles played by women representatives in Kenya are contained in Article 95 of the Constitution and they include budgeting (allocation, appropriation and oversight of national revenue), determining the conduct of State officers, overseeing state organs and approving declarations of war and states of emergency.

The women representatives have also been allocated a fund known as the Affirmative Action Social Development Fund. This fund is similar to the Constituency Development Fund (CDF). The fund is supposed to assist the women to implement projects in their counties that are in line with their mandate of female gender empowerment.

Nevertheless, the Women Representatives do not deserve the fund. A recent High Court ruling declared CDF unconstitutional and the Constitution prohibits legislative members from performing executive functions, which includes management of funds.

Legislators are supposed to represent the people, oversee the national government and its organs and to legislate (make and amend laws). In essence, the ruling that invalidated CDF also invalidated other funds like the Social Affirmative Action Fund for Women Representatives.