Sant’Egidio Kenya thanks Pope for meeting them

When the announcement of the coming of the Pope was officially made to Kenyans in July, a little known community of Catholic faithful in the country set on an agenda to meet him.

Known as the Community of Sant’Egidio, the community wanted to share with Pope Francis their joy and pains of their deep relationship with the poor.

“Every other Christian wanted to meet the Pope. We wanted recognition of the work that the community does in Kenya,”

“we wanted to express our solidarity with the Pope for his love of the poor.”

Started in 1968 in Rome the Community is a movement of lay people spread in more than 73 countries throughout the world. Like the Pope who has shown likeness and identity with the poor it runs projects dedicated to the most ‘insignificant’ of the earth – among them the elderly, women and children.

In Kenya for instance, every Christmas, Waithaka and his team usually gathers families from slum areas in Nakuru to serve them a hot meal. He also coordinates to see that they too get some niceties from Santa Claus like all of us – clothes and shoes and all. Such is a service Waithaka and his local team felt would interest the Pontiff. 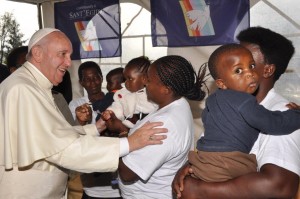 Santa’Egidio Kenya wanted to share with the Pope the work they do in the country (Photo: Courtesy/Waithaka).

“He (The Pope) had met the Community in Rome and has had contact with it in Argentina,”

Waithaka told Kenya Monitor on how they began planning on meeting him upon which they made a request to Vatican through the Pope’s security team.

Unfortunately the request was declined.

“So we wanted to be among those who would wait for him on his way to Kangemi,” he said.

But three days to the visit, lady luck smiled in their favor. Or let us just say the angels in heaven conspired to deliver their dream. After all part of their projects with the poor is one dubbed DREAM, and that coming at an era when we all believe, with utmost faithfulness, that all dreams are valid.

“Two days to the visit when the Pope’s inner security team arrived in the country we were shown a space on which we would pitch our tent at St. Mary’s grounds.”

With that they were set to meet, perhaps, the most influential figure in the whole world at the moment. Their meeting was slated just after the meeting of the Pope with the clergy.

In the tent they gathered a group of women living positively with their children who had been delivered free of the AIDS causing virus thanks to the DREAM programme of prevention of mother to child transmission run by the community in the country.

“DREAM means “dream”, but in recent years has become a reality for thousands of people, because it shows that even if you are HIV-positive, you can live healthy and take care of your family, having overcome stigma, a common barrier in Africa, since the disease (is) still considered by many incurable,”

a press statement released by the community after the visit partly read.

“The “miracle” in the eyes of many is the birth, of 1, 056 children born healthy to HIV-positive mothers here in Kenya, thanks to treatment. It is one of the challenges overcome by the DREAM program (Disease Relief through Excellent and Advanced Means) that in Africa is present in 10 countries, with 270,000 people on treatment and 55 000 children born healthy,”

According to Waithaka the Pope spent at least 7 minutes in their tent, interacting with the mothers and their children.

“He greeted everyone and kissed all the children,”

he says with nostalgia of the time they had with him. 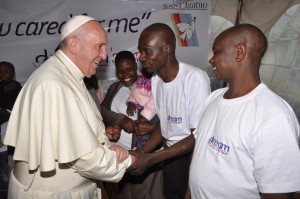 “Talking to Pope Francis is like talking to heaven,” Waithaka (Photo: Courtesy/Waithaka.

He said in English,

“Thank you for the work of the community in Kenya”

and I said “Thank you”” remembers Waithaka of his communication with the Pope when he got at the tent.

“It was really great. We thank him for the time he spent with us. For us it’s a total call to go and serve the poor even the more. We also thank the Community in Rome for making the visit possible.”

Besides Sant’Egidio the Pope also held a private meeting with leaders from various religions during his three days visit in the country which was more close and personal than his other public forums.

“Talking to (Pope) Francis is like talking to heaven,”

concludes Waithaka who happens to have met Pope John Paul (II) in 2001 in Rome.

“Touching John Paul was like touching a relic, something that was holly,”

he says of the Pope who was declared a Saint in April last year as he compares him with Pope Francis.

During his visit to Kenya Pope Francis reminded all citizens to be committed in ending vices such as corruption and tribalism that have for long troubled the nation while repeating his call to the care of the environment, a topic he extensively wrote about in his May encyclical titled ‘Laudato Si’.

“I think the Pope talked to our hearts, our conscience,”

he says Waithaka while adding that his visit should inspire change in the country.

“His visit should change Kenya, if it doesn’t (then) I don’t know what will.”