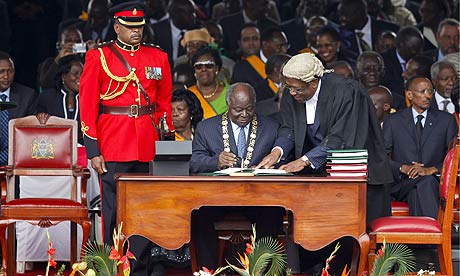 The Constitution has been a blessing to Kenya 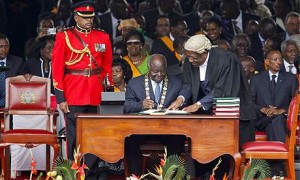 Kenya’s 2010 Constitution has had a fair share of success in its four years of implementation. It certainly a reality that without the 2007/8 post election violence and the ensuing mediation efforts, Kenyans would still have the old Constitution. Be as it may, the document which I call the political bible will still need time to be tested for a concrete appraisal to be made but so far, a fairly positive comment on it is apparent.

The first success has been the assertive independent Judiciary. The February 2014 Ipsos Synovate Poll said that the trust in the Judiciary among Kenyans stood at 12 per cent. The same poll had levels of confidence in the Supreme Court and the Chief Justice at 16 per cent. These results, though below par, still put the Judiciary among the top institutions Kenyans rely upon.

This trust could also be derived from the way the institution has criticized and ruled against the government on a number of occasions. For instance, In November 2011, Justice Nicholas Ombija issued arrest warrant for President Bashir should he step in the country so that he is extradited to face charges at the ICC. After this ruling, many other judges have been bold to call the executive and Parliament to order.

Chief Justice Willy Mutunga has also not disappointed. He has stood firm in defending the Judiciary and informing all that he does not direct any Judge on a matter and that the institution will maintain fidelity to the Constitution and laws passed. Its greatest soul has been independent financing from the consolidated fund unlike before when the President determined its budget.

In recent months, various organs of government have gone to court to seek its opinion on certain matters or even quashing some issues they deem unlawful. The supremacy battles between the Senate and National Assembly is a good case in point. Kenyans still feel that justice can be bought by the highest bidder but the institution has made tremendous milestone thanks to the Constitution and over time, it could win more hearts should it continue being vocal and transparent. Certainly some issues of accountability against former Registrar Gladys Boss Shollei and leaked emails between the CJ and senior Judiciary officials’ bleak the view but all is not lost.

The second benefit Kenyans derived from the Constitution is Public Participation. The participation of the public in public affairs is first seen in Article 10 on national values. It means that engaging the public before deciding on policies, laws and decisions is a national value which should be accorded and respected. This is the spirit that informs all decisions to be made especially those that go through Parliament or County Assemblies.

This practice has been considerably successful in national politics. Parliament has sought the views of the public on numerous occasions before deciding on issues especially Bills and appointments. This has been through written memoranda or attending public forums. The public have also taken interest in governance by presenting petitions to the House through the speakers of Parliament.

The challenge or question has been how effective these initiatives have been. For instance, an audit of how Kenyans respond to request for memoranda on Bills and appointment will shed more light. Parliament uses newspapers to announce for the memoranda. These newspapers are not accessible to all whilst it is a good attempt. Knowing its effectiveness could be by checking the quality and quantity of memoranda submitted. This has yet to be done. The scenario could be poor in counties which have yet to settle and Kenyans take a deeper interest in the affairs of the county governments.

The third and probably most profound success of the Constitution has been giving Kenyans hope. From time to time, Kenyans in their diverse walks of life cite rights and freedoms that the Constitution guarantees them. For instance, the right to picket has been utilized and when police try to scuttle protestors, some cite them.

There was hope that the Constitution will protect Kenya from bloodshed in the March, 4 2013 General Elections and indeed it did as Presidential aspirant Raila Odinga sought the Supreme Court’s intervention in the polls and respected its decision. He has on numerous occasions said he did not accept it but he respected it, something that calmed his supporters and Kenya has been able to move ahead with nation building.

There was also hope that the new Executive with professionals running ministries will help steer the country better unlike before when ministers were from Parliament. While some attempts are being made to allow the President to choose Cabinet Secretaries from Parliament, that will require an amendment to the Constitution which the process is yet to commence.

In addition, Kenyans feeling that the country is not being steered correctly have made their stand in the referendum push. They are using the popular initiative which is shielding the initiative from Parliament which could easily sabotage the process. The laborious process enshrined in the Constitution with various ways of amending the Constitution has certainly been a good provision that inter alia could be a quagmire.

People centered governance, as enshrined in Article 1 (1) of the Constitution is something to celebrate. The effectiveness could be questioned, which will take a process and concerted efforts but in principle, the political bible has moved Kenya forward.

Its greatest weakness was the belief among the drafters that goodwill shall prevail in its implementation. Many clauses were left as abstract or without clear provisions on the basis that those implementing it, majorly the governments arms of Parliament and Executive will maintain fidelity to the spirit that informed the over 63 per cent that voted for the document on August 4th 2010.

A classic example is the lack of clarity of which house is the upper one between the National Assembly and the Senate and this has seen them squabble from time to time. Some other issues like gender principle have been challenged in court with the courts taking a progressive interpretation of the document. It is a challenge that Dr. Ekuru Aukot, who served as Director of the Committee of Experts has underlined adding that given another chance, such a body should ensure nothing is left on ‘goodwill’. It must be clearly provided.