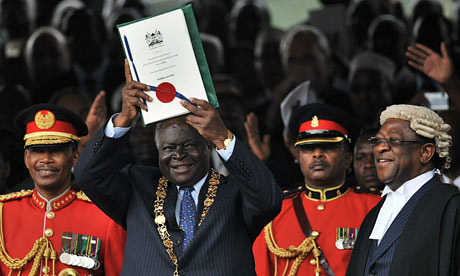 The Mirage of Constitutional Participation In Kenya Some commentators have referred to Kenya’s 2010 constitution as the most progressive constitution sub-Saharan Africa has ever seen. Well, that might sound a little bit like a hyperbole but the Kenyan constitution lays the perfect foundation for a constitutional a democracy. Of great importance is the role of the constitution gives to citizen sovereignty, the preamble for example explicitly states that,

“All the sovereign power belongs to the people of Kenya and shall be exercised only accordance with this constitution.”

Simply put, the promulgation of the current constitution in 2010 was Kenya’s Magana Carta moment.This is unlike the Lancaster Constitution which begun by stating that;

“Kenya is a Sovereign Republic.”

Remember it was not until the 1991 that Section 2A of the Lancaster Constitution was repealed to pave way for multi-party democracy. It is clear that the Lancaster Constitution did not pay any attention, however remote to citizen sovereignty. Though the current constitution is ambitious in approach, it does underscore the importance the people of Kenya place on progressive people centered governance.
The pitfalls of the Lancaster Constitution, particularly its relegation of citizens to mere appendages of statecraft was the reason it was critical to have a new constitution in the first place and a new constitution we had ourselves in August of 2010. Save for the supremacy of the citizen sovereignty which the constitution granted to the people of Kenya, the inclusion of citizen participation on critical issues of social, economic and political concern to Kenyans is also an important and progressive feature of this constitution.
Citizen participation in all spheres of life is an important feature of 21st century good governance best practice. In fact the rationale behind devolution was that it would provide citizens further away from the center of power that was Nairobi with a real chance to prioritize and decide how resources would be used for their benefit. Article 174 (C)of the constitution states that the objects of devolution of government is,

“to give powers of self-governance to the people and enhance the participation of the people in the exercise of the powers of the State and in making decisions affecting them.”

“to recognize the rights of communities to manage their own affairs and to further their own development.”

These articles from the constitution show a clear departure from the way of old, the constitution heralds in a new era of people centered development. From the onset in the preamble the theme that the ‘citizen’ is the single most important actor in Kenyan threads through the entire document.
But perhaps there is no more pronounced role for citizen participation than in the management of Public Finance. Previously the executive almost unanimously had discretionary sanction to decide how public finances were utilized, not anymore. Article 221 (5) provides room for the public to play a constructive role in budget making in the country,

The public thus have a much more refined role to play in creating sectoral equity through the budget process. The public can for example assert they need more spending in education rather than health or security for that matter, the prerogative is really with them. The Public Finance Management Act (2012), the subsidiary act that qualifies the Chapter 12 of the constitution on Public Finance Management obligates the Treasury to include the views of the public in the preparation of the Budget Policy statement.
Before we celebrate these small constitutional victories, there is need to examine whether the spirit of the constitution of providing for consistent citizen participation in matters of governance is being giving more than superficial adherence.
There is need to know whether indeed to know whether citizens and citizen groups understand that they are indeed a critical cog in the balanced development of the country. Whether indeed executive structures have created the avenues necessaries to facilitate citizen participation. For example the Parliamentary Budgetary Office gave the National Treasury 53% compliance rate when it comes to release the of important document for citizen participation.
In addition there is need to deal with deep set issues of apathy, historical occurrences of insensitivity to citizen needs in the past get into the way of effective participation. Perhaps citizens feel that public forums to discuss key issues are no more than window dressing exercises meant only to comply with constitutional thresholds rather than exercises to mainstream them in the determination of resource prioritization.
Indeed there is need for further civic education, not only to enlighten them on their roles and responsibility in development planning but also to increase their capacity in order to alleviate the asymmetries that occur when engage with governmental officers.