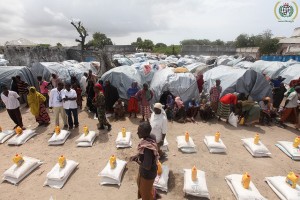 We cannot violate another person’s humanity without violating our own. This realization led to the adoption of the Universal Declaration of Human Rights by the General Assembly on December 10, 1948. We marked 68 years this week since then, and it cannot be denied that there have been huge gains in human rights world over. However, we must also acknowledge that there is room for improvement and that we as citizens have a role to play.

It is not possible to participate in what you do not know. It’s therefore important to understand what human rights are so as to better participate in upholding and defending them. Human rights are legal guarantees that protect individuals and groups against actions which interfere with fundamental freedoms and human dignity.

Human Rights are classified into three: Civil and Political Rights that ensure one’s ability to participate in the civil and political life of the State without discrimination or repression such as Freedom from slavery, servitude and forced labour (Article 30), Right to privacy (Article 31), Freedom of conscience, religion, belief and opinion (Article 32) and Freedom of the media (Article 34); Economic, Social and Cultural Rights and Collective that seek to provide minimum protection of social safety of the person dependent on a on a State’s economic abilities such as education, security and fair remuneration and working conditions; Group and Community Rights that define obligations of the government in relation to groups of people such as minority and special interest groups.

Two important characteristics of human rights are that they are universal which means they apply to every human being regardless of their race, gender, nationality or creed and they are indivisible meaning that people are entitled to all the rights stipulated. This is important to note as it clears the doubts that one’s human rights can be suspended. Another important note to make is that human rights are not new. Long before colonization, our forefathers had a system of fairness that was used to protect members of the society. The traditional laws may not have been to the level of the current stipulations on human rights, but there was an effort to treat people justly and it was a community effort.

The New Constitution has seen Kenya adopt an advanced Bill of Rights that has conferred certain rights to citizens. The Bill of Rights is covered in Chapter 4 of the constitution and is the constitution’s longest chapter. Clause 3 of article 19 makes it clear that the freedoms of the Bill of Rights “belong to each individual and are not granted by the state” making these rights inalienable and therefore cannot be taken away by anyone including the State. The State therefore is obliged to uphold and guarantee human rights.

Human Rights should not be just an intellectual reality where there is awareness of them but a lived reality where this knowledge is acted upon by the society in a bid to implement these rights for every human being’s enjoyment of them. This calls for participation from every citizen. We all must recognize the equality of all human beings and that their (and our) humanity confers inalienable rights on them and we must be aware of what these rights are. Information is power. We must also recognize that every right has a corresponding duty and therefore we have a responsibility to ensure that these rights are respected and upheld.

Some of the ways that citizens can play a role with respect to human rights by taking an interest in the country’s state affairs and processes and they must be proactive and remain vigilant, checking on government use of power and its implications on all their rights through exercising their right to vote, recalling errant political representatives, making complaints through the Ombudsman and the various human rights institutions, use of the courts system, lawful protests, petitions and picketing and active and informed participation in decision making at all levels.

Citizens also have the duty and responsibility to respect the rights of others. Even more important, we as citizens have the moral responsibility to stand for the upholding of these rights for others. We cannot enjoy these rights while at the same time witness them being denied to other people. The goal must be to create a country, and indeed a world, that has a strong human rights culture. It is the only way we can hope to ensure that every human being lives a dignified life.