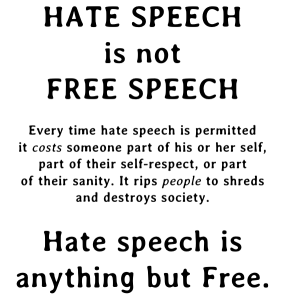 Hate speech on Social Media: A Case of Misplaced Locus of Responsibility

Social media only features on our daily plate of bad places to hate on each other because it is sexy.

It is sexy for the government to be seen as working to inculcate (not restore, we have never been united) true national cohesion and the warm fuzzy feeling of hating each other beyond  tribe and gender. Social media offers the older bureaucrats a chance to show the younger online generation whose boss. The sad thing is that in our peace lobotomy, we have validated it. We feel that the limits of the Bill of Rights apply to situations where we have a responsibility to be responsible. Incitement does not shift the locus of responsibility from the actor unless he or she is a young child or has a mental disability. The end decision of whether to hate your fellow man lies with you and your environment (and if you are religious, your respective deity).

African governments are scared of social media. Social media brought down Hosni Mubarak in less than three weeks despite his desperate attempts to block its use. So now African governments, beginning in Malawi, Zambia, and now Kenya, are now seeking to follow the China model, with less glamour and innovation (The Chinese have the decency to provide Baidu and other alternatives  to control ‘subversion’).

Hate speech assumes that the reader does not have a responsibility to decide whether to pick up a machete and slaughter his neighbor and burn a church full of people. It assumes that you, as the reader, do not have a choice to decide to stop reading this and close the tab. I owe you a responsibility to be politically correct and to be sensitive to what might read like revolutionary material. You owe me as much responsibility for understanding this, for example, as I owe you for choosing these words. They would be ineffective if you could not understand them, contextually.

In the ‘Mau Mau’ War, hate speech took the form of propaganda pamphlets that were distributed by both sides, and included many forms of expression, including the content of oaths and war songs, this evolved into the implied hate speeches that drove the intrigues of the first government under Kenyatta the Elder, and was perfected under Moi. We lost the script when society kept quiet as Ngugi wa Thiong’o, Koigi wa Wamwere, Wahome Mutahi and others were detained for ‘sedition’ and other such ridiculous crimes. To the people, the state was not to be questioned, peace and sustainability (read self-preservation) were king, the same thing we are going through right now. Until the Second Liberation took place and we all temporarily realized that the ones who say ‘bad things’ need protection. Our view is largely libertarian and communitarian. Libertarians believe that the right to free speech may be limited only for compelling reasons such as fighting words. Communitarians believe in the community’s ‘well-being.’

We all know what happens when we let the government, or anyone in a position of power, infringe on the rights of a few people. At first, it is all bliss and calls of ‘JAIL THE TRAITORS OF OUR COSMETIC PEACE AND NATIONAL COHESION!’ ‘JAIL THOSE MYOPIC BACKWARD PEOPLE WHO ARE ONLY TELLING US WHAT WE THINK OF IN THE COMFORT OF OUR OWN HOMES AND MINDS.’ Before long, all is lost, and now a typographic error that accidentally connects someone’s name with the word ‘stupid or incompetent’ qualifies as a capital offence. Is this it? This cannot happen? It already is at an advanced stage. The press is now too tainted by corporate influence to matter, the civil societies are no longer civil or focused on society, the government is just being well, the government (the garb has changed, the body is still the same despite going on mandatory ‘cabinet lift and devolution’ cosmetics). We have so much coffee we should be waking up to but we are busy uprooting it to build gated communities. Voltaire said that if you want to know who controls you, just check whom you are not allowed to criticize.

This article first appeared on Owaahh’s Blog. Read the Full Article Here
Morris Kiruga is a writer and researcher. He blogs at www.owaahh.com every so often, but spends most of his time eating bananas.