Using art to engage on the Constitution 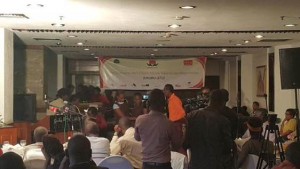 Institute of Performing arts (IPAL) entertaining the guests at the launch.

Art is becoming a pervasive and acceptable form of expression in Kenya, a reality that if well utilized, offers a great opportunity to learn and unlearn some otherwise hard concepts like the Constitution. Lack of understanding and readership of the Constitution has been blamed on its language, something those in the know are working to unpack through forms that also promote better retention capacity.

Jukumu Letu is one such initiative meant to promote the understanding of the Constitution through art. The initiative supported by various donors like Hivos, uses social media, music, performing arts and puppets to drive Constitutional messages to citizens.

This was the message passed across during its media breakfast and stakeholder mapping on Friday, 28th February 2015.

At the breakfast, it was clear that the use of art is not only apparent but also useful as it helps to reach out to more people through avenues people easily relate to. This is especially the case considering that the struggle to get a new Constitution was fraught with many hurdles which would only be worth if the document is implemented.

“The struggle for a new constitutional dispensation was hard but the implementation process is even harder,”

Ensuring that the Constitution is understood by all regardless of class and education is therefore a core focus of the Jukumu Letu initiative. This was underscored by Regina Opondo, the Executive Director of CRECO. She said that the  project is meant to ensure Kenyan citizens benefit from devolution, exercise self-governance through robust citizens participation, providing a platform where citizens meet county assembly or county government leaders to discuss issues that affect them, priorities and chart the way forward for the county, to give citizens support to audit what is happening in their own county, make decisions and decide the destiny for their county. She said

Puppet show on civic responsibility? Must be the Institute of Performing Artists Limited! #JukumuLetu… https://t.co/p7DC1Gb8S3 — Daudi Were (@mentalacrobatic) February 27, 2015

.@KenyanReg reminds us Article 3 of the Kenyan constitution obliges us to respect, uphold and DEFEND our Constitution. #JukumuLetu — Daudi Were (@mentalacrobatic) February 27, 2015

This responsibility involves all, both young and old.

Jukumu Letu initiative intends to take this program across the country.

Carla: @ied_africa to create a youth democracy camp to promote leaning on democracy and governance #Jukumuletu

This initiative is not happening without a core context. Hivos notes that the Jukumu Letu programme comes at a time when various attempts have been made by the state to undermine institutions of governance. This calls for action to adopt a political strategy towards promoting democracy, transparency and accountability.

“Hivos is committed to this process and wants to play a leading and coordinating role among the programme’s partners and provide the resources necessary for Jukumu Letu to be implemented,”

The vision is not only clear but also robust from the initiators of the program.

“If you look at the initiative, it involves many players, for instance, musicians, thespians, bloggers. When we sat down to consider our involvement, the fact that we will be getting the opportunity to work with ten musicians from every county in Kenya was a chance we could not pass up. Imagine, talking about and composing songs on social justice with all these musicians. That is 470 musicians around Kenya singing about issues in their locality, in their own sound and in their own language, I don’t think there is anything bigger than that! For us as a band we wanted to be part of that process and that is the gift we can give to our country,” says George Ndeche, Sarabi’s founder.

Thanks @sarabiafrica for making my morning with a beautiful performance of the song amandla! #jukumuletu pic.twitter.com/7f39Az5Slc — Stijn Janssen (@stijntjejanssen) February 27, 2015