“Don’t use social media to propagate hate speech,” she said.

While advising students to have “unity of purpose” she called them to use to use social media for purposes of positive networking initiatives.

“Let us use social media to market ourselves,” she added.

In the resent years social media has experienced exponential growth in the country with many Kenyans using it for sharing information instantly. There is a reference of Kenyans on Twitter (KOT) which is usually an identity of Kenyans who actively use social media, especially Twitter.

And these days, every media house has a harsh tag (#) for every discussion and news bulletin they present.
But social media has also been misused.

Gatundu South Member of Parliament Moses Kuria has in the past been accused of using his Facebook page to propagate ethnic hatred. At one time he was asked to apologize for his conduct by the National Cohesion and Integration Commission (NCIC). 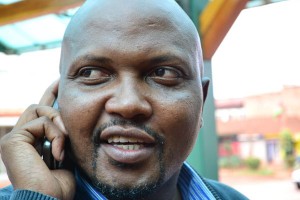 Gatundu South Member of Parliament Moses Kuria. He has been accused of using social media to propagate hate speech.

Allan Wadi, a Moi University finalist was jailed for two years in January this year after he was found guilty of propagating hate speech against President Uhuru Kenyatta through his Facebook account.

Apart from these claims, the International Criminal Court has blamed social media users for using it to interfere with the delivery of justice in the case against Kenyatta that was terminated on March 13.

During the withdrawal of the case on December 5, the courts Prosecutor Fatou Bensouda blamed what she stream of false reports that were partly shared through social media and that allegedly threatened witnesses.

The theme for the annual event which saw the crowning of two students as Mr. and Miss Egerton Nakuru Town Campus was cultural diversity for intellectual and talent development.

Dr. Daniel Auka, the Dean of the Faculty of Commerce who was also present at the event held at the Nakuru show ground called for tolerance in cultural diversity.

“We can only build a strong nation if we embrace the culture of togetherness,” he said.