A elephant and its calf
Photo:Google.com

Makueni County has in  the recent past witnessed increased number of human- wildlife conflicts that have had devastating effects. In the last one year, close to ten people lost their lives in human wildlife related conflicts while scores of others have been maimed in deadly animal attacks.

The animals have also wrecked havoc, destroying property essentially farm crops worth millions of shillings leaving a trail of despondency among farmers who already struggle enough to plant their crops under the county’s harsh climatic conditions.

Makindu, Kibwezi and Mtito Andei  bear the brunt of most wildlife invasions due to the areas’ proximity to the national parks while Mavindini  and Kanthuni also hot spots of similar attacks which Chyulu Senior Warden Peter Mbote attributes to an elephant migratory route dating back to over 100 years.

The problem is further aggravated by lack of an electric fence in a 42km stretch along the Tsavo park which makes it easy for the animals to freely move in and out of the park especially during dry seasons in search of pasture and water.

Cases of fatal attacks especially by hippos have also been reported in Kitise and Ivinga Nzia  areas  close to Athi river, which is used by both humans and animals.

The latest incident of human wildlife conflict reported in February 10 this year after a 40 -year- old man was shot dead in Makindu, allegedly by Kenya Wildlife Service (KWS) rangers in a confrontation with locals while rescuing a jumbo that had stuck in shallow well angered residents who demanded for a lasting solution to the human wildlife conflicts.

The elephant was part of a herd of 11 jumbos believed to have escaped from the nearby Chyulu park that had in the early hours of the fateful day trampled a 70 year- old woman to death in Nguu, Kibwezi west sub county.

The killings, sparked demonstrations along the busy Nairobi -Mombasa highway and residents barricaded the road causing a traffic snarl up that lasted for several hours.

Makueni Governor Prof. Kivutha Kibwana and his deputy Adelina Mwau, led the demonstrators in urging the KWS to completely fence off the park to avert further attacks.

The residents also took to social media and especially Facebook to register their displeasure of the rampant attacks and the KWS’ apparent lack of concern.

In his official Facebook page, the governor gave the national government and the KWS an ultimatum to offer a permanent solution failure to which the residents would take matters in their own hands. 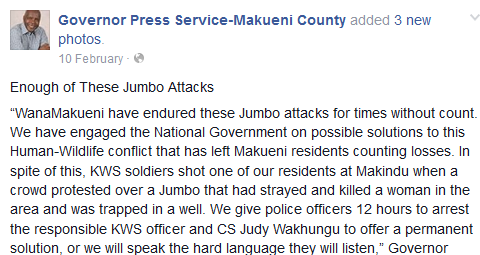 The governors’ call was supported by a majority of residents and some even suggested drastic measures.

Judging from the comments of the residents including the Governor, it was clear that the people of Makueni  were fed up with the human wildlife conflicts. It is against this backdrop that the KWS and the national government have come up with measures  to hopefully end the menace.

In his recent visit to the county, Interior Cabinet Secretary (CS ) Joseph Nkaissery said the national government will help stop the conflicts by fencing off the Tsavo park.

Interior Cabinet Secretary Joseph Nkaissery when he recently paid a courtesy visit to Makueni Governor Kivutha Kibwana in his office at the County headquarters in Wote
Photo:Governor’s Press

The CS retaliated the government’s commitment in curbing the attacks and promoting a peaceful co-existence between the residents and the animals.

“This is a matter that the government is treating with a lot of seriousness and we shall put in place measures to stop the conflicts once and for all,” said Nkaissery.

On its part, the KWS has also explored available options to help curb the conflicts. According Senior Warden Mbote, David Shedrick Wildlife Trust Fund a non governmental organization has already donated Sh14M to fence off the 42km stretch in Tsavo in a bid to reduce the human wildlife conflicts.

Mbote says the works of the fencing have already started with the clearing of bushes to pave way for the electric fence.

“Kibwezi West CDF  has funded the clearing which is ongoing and once the process is over we shall expeditiously initiate the fencing,” says the Senior Warden.

Mbote also discloses that they have set up a conflict crisis center in Kiboko for handling conflicts and matters of compensation.

“We established the center so that residents can quickly report the incidents for quick resolve, besides we have already kicked off a recruitment exercise in which we intend to employ close to 1, ooo rangers for increased surveillance,”says Mbote.

The fencing of the park brings an array of hope for many farmers who have suffered immense losses due to the continuous wildlife invasions. Julius Kamula a farmer in Makindu knows too well what it means to have ones farm invaded by the animals especially the jumbos.

For the last 13 years he has endured the havoc wrecked by the animals in his mango and maize plantations running into millions of shillings.

“I have watched in disbelief as the elephant destroy the crops that I have struggled to plant in a single night,” says the distraught farmer.

Kamula’s pain is further heightened by KWS slow response when the elephants attack, which more often that not force him and fellow villagers to use unconventional methods to chase away the animals, putting their lives at risks.

“We use torches or lit bon fires to chase the jumbos away, KWS officers take long to respond to our distress calls,”he says.

Nguu/Masumba Ward MCA Timothy Maneno also a farmer echoes Kamula’s words, saying that he has lost count on the number of times jumbos have invaded his mango plantation.

The last time the elephants struck in his village in February,mango farmers were left counting losses after thousands of mature mango fruits were destroyed by the marauding elephants.

“Besides killing a 70 -year -old woman in my ward, millions were lost and not a single farmer has ever been compensated by the KWS despite a new act in place,” he adds.

According to the Kenya Wildlife and Conservation Act 2014, the family of a person killed by a wildlife animal shall be paid Sh5M up from Sh200,000 while injuries leading to permanent disability shall be compensated Sh3M and Sh2M for any other injury. The law also includes compensation for property including crop damage.

With the fencing of the park and government assurances to curb the human wildlife conflicts, the residents of Makueni especially those living in vulnerable areas of wildlife invasions can now breathe a sigh of relief, and with the onset of the long rains, the residents can only hope the fencing will be complete before the drought season sets in when most animals leave the park in search of water and pasture.