Actors at the Nakuru Players Theatre train ahead of the launch. The actors will present the pressing issues in the county through art.

The Jukumu Letu campaign will be launched in Nakuru on Saturday April 25th, 2015. Charity Nzomo the Communications Officer for Constitution and Reform Consortium (CRECO) has told the Kenya Monitor that all is in place for the launch of the initiative which seeks to sensitize locals towards citizen participation.

“The emphasis during the launch will be on the power of the people to voice out the issues,”

Nzomo told Kenya Monitor at the Nakuru Players theatre where different artists have been rehearsing ahead of the launch.

“When you have the power it becomes easier for you to exercise your responsibility,” she added. 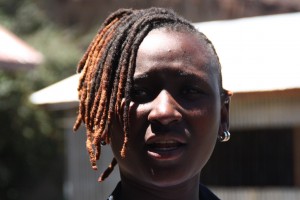 Charity Nzomo the CRECO’s Communication Offer says all is set for the event.

The event which will take place at the Nyayo Gardens, an open space which is at center of Nakuru Town will see the artists act out the pressing issues for the county.

Charity said at least 5 groups comprising deejays, dancers, puppeteers and musicians will be participating. They include Dance into Space, Kenya Institute of Puppet Theatre, Sarabi Band, Deejays with a Course, and Cartoonists. 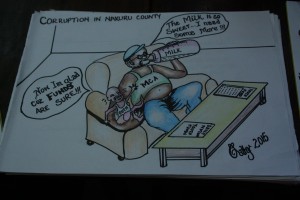 One of the cartoons that will be exhibited during the event which seeks to stir citizens participation on governance and the constitution.

Other groups and organisations that will take part in the launch are the Bloggers Association of Kenya (BAKE), Center for Enhancing Democracy and Good Governance (CEDGG), Dial-a-Radio, and Ghetto Radio. Already the activity which is one of its kind in the county has received a good reception from the local radio stations through programmes at Sauti ya Mwananchi Radio and Radio Amani.

“We are focusing on the themes of governance, constitution and constitutionalism, and accountability,” Nzomo added.

Mwangi Muraya of CEDGG, the local partner organisation is optimistic that the event will be successful.

“We have already created awareness and we are encouraged that citizens know it’s their responsibility to keep leaders on track,” he said.

After the Nakuru launch the Jukumu Letu campaign caravan will head to Mombasa County.

There has been low citizen participation in Nakuru County and it is hoped that the event will stir citizens to be much more concerned with the affairs of the county which is one of the most urban in the country.