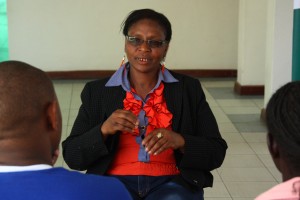 Njoroge and Akinyi follow their sign language interpreter during the training at the KNLS. They want more of such trainings to the deaf.

It was a first for the Bloggers Association of Kenya (BAKE) as two persons with hearing disability turned up for a training that had been organised for blogging enthusiasts in Nakuru.

Through a sign language interpreter the two, Martin Njoroge and Priscila Akinyi remained attentive throughout the training that was conducted at the Nakuru Branch of the Kenya National Library Services (KNLS).

They asked questions prodding on how the deaf can be involved more on such forums and even challenged for the creation of technology based programmes that are friendly to the deaf. A participant with a BAKE flier during the training. More than 100 participants took part.

“What I liked most about the training was the whole concept of using blogs to track the implementation of the constitution,” said Njoroge.

Njoroge who has been participating on the developments of the Nakuru County Government and who even takes part in citizen participation forums said he would like more deaf people taught about the constitution.

“This will reduce instances in which they break the law out of ignorance,” he said.

Their interpreter Keziah Kimani said it was important for people with disability to be included in such forums.

“Kenya is encouraging inclucivity. We want more people with disability considered in every aspect,” she said.

BAKE’s Director of Training and Outreach, Njeri Wangari expressed the association excitement of the participation of the two saying they never expected it.

“It was fascinating and encouraging. It has given us something to think about and how we can target people with disabilities,” she said.

The training attracted more than 130 participants most of them youth in colleges and universities in Nakuru town and was held a day before the official launch of the Jukumu Letu Campaign in the County. A tweet by CRECO. This was the first time that people with disability were showing up for a training on blogging in BAKE’s events.

Mercy Opande a blogger and student at Egerton University said the training would enable her to improve on her blogging.

Elijah Kinyanjui a veteran journalist who is also a blogger in the county was impressed saying after the forum it would be easy to bring unite the bloggers in the county.

“The initiative is welcome especially in this region where everyone is on the internet but there isn’t any unifying factor,” he said.

It is hoped that more deaf people will show interest in such initiatives. In addition, it is a challenge to Kenyans at large to embrace people with disabilities in all their activities as disability is not inability.