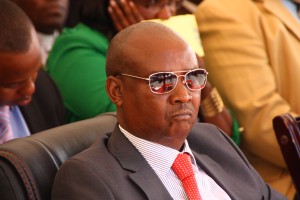 Nakuru Governor Kinuthia Mbugua at a past event. He hit at Mututho for announcing he would campaign for the gubernatorial seat in the next general election (Photo/Kioko).

The National Campaigns Against Drug Abuse (NACADA) chairman John Mututho seems to have opened a can of worms for himself after he announced over the weekend that he would vie for the Nakuru Gubernatorial seat in the general elections.

Speaking to a group dubbed ‘Nakuru King Makers’ whose members communicate through a Whatsapp group with the same name the former Naivasha legislator said he stepped aside from the race in the last general election after being told President Uhuru Kenyatta who was then the Jubilee candidate would give him another job.

The group had congregated at the Lake Nakuru Lodge and during the meeting Mututho is said to have ‘bragged’ of having been one of top contributors in the last Parliament. He blamed the current leadership in Nakuru County which is led by governor Kinuthia Mbugua for not “delivering” to the people.

And today, Mbugua who is sometimes a reserved politician hit back at him while scorning him for losing the Naivasha seat in the last election.

“When wananchi tell you we cannot give you a seat that is enough,”

Mbugua told an audience that had gathered at his offices for the commissioning of a sh2 billion project for the upgrading of informal settlements in the county.

“We all know how his people rewarded him for making those contributions,”

Mbugua said in reaction to the contributions Mututho had said he made in parliamentary debates during his term as Naivasha M.P.

“Those contributions were to disrupt,”

Mbugua hit out while also hitting at the group that had given him the forum at the lodge.

“The king makers are here. They come out in the open and talk to people,”

Mbugua said while challenging Mututho to concentrate on his work at NACADA.

Ironically before Mbugua made the remarks in response to Mututho, he had started by telling the gathering he does not like politicking.

The event was also attended by the National Assembly Speaker Justin Muturi. He asked Kenyans to tolerate each other in the ongoing debate about the gender representation in Parliament.

“We must allow debate and freedom of expression and the right to hold opinion,” he said.

The Nakuru gubernatorial seat promises to be a very hotly contested seat in the next general election. Apart from Mututho, former Secretary to the Cabinet Francis Kimemia is rumored to be eyeing the seat while Lee Kinyanjui who was eliminated at the party nomination stage might also be going for it.

And even so, Mbugua might have a hard time convincing Nakuru voters to give him a second chance given that the region has a history of not re-electing leaders.