‘Arosto’, cocktails of different narcotics, in Mombasa is getting worse Drugs found on a peddler during a raid by the Mombasa county inspectorate officers.

Arosto is a street term used to mean being in a high drug induced state or to refer to substances that cause this high.

Drug abuse in Mombasa and other neighboring counties is a problem that cannot simply be wished away. Mombasa seems to be the most affected. So much so, that in the last 20 days or so, the county inspectorate officers have arrested over 60 peddlers in Island, Kisauni, Bombolulu, Magongo among other places.

The most common drugs used in Mombasa are cannabis, cocaine and heroin. Advanced users are now using cocktails of different narcotics to get stronger ‘arosto’. For instance rohypnol which is a pre-medication in surgical procedures is now being used to ‘boost’ the heroin high.

According to this study, the  ease  of  access  and availability of cannabis  among community  members is a contributing  factor to its  greater use. What is more, majority of drug  users start to use at their youthful age between 15 to 30 years of age and a significant proportion of the users start using at an older age. Although male  users form the majority the females are not left  out.

Mark Wesala, a Kisauni resident tells of how the area has become insecure over the years due to threats from drug users, more commonly referred to as mateja. The addicts turn to mugging and petty crime to supplement their drug habits.

“This neighborhood is no longer safe.” A drug user displays a blue tongue from repeated use of narcotics.

Salma, who lives in Bombolulu, concurs, saying the case is the same there. She also laments how young men and women have gotten themselves into drug use and it has destroyed their lives so.

“These are young people who would otherwise have had bright futures, but once they get into doing use they do not care about their lives. Most of these mateja are people I have known since they were toddlers.”

The drugs are supplied by Drug Lords with ties to government officials or in some positions of power. Over time, these drug peddlers are proving difficult to bring to book, either due to incompetent authority mechanisms or reluctance from citizens with knowledge of their identities to reveal them. Meanwhile, more and more idle youths are engaging in drug use and drug abuse, a worrying trend in the very least.

Earlier in the year, Mombasa Governor Hassan Joho and his Lamu counterpart pledged to join forces in the fight against drug use. Measures have been put into place to achieve this. A number of campaigns have been 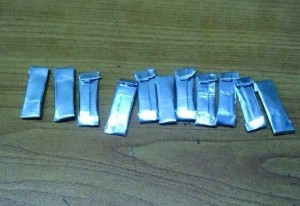 Sachets of Heroin found on a peddler in Kisauni

put in place to sensitize the youth on the dangers of drug abuse. The government hopes to get those already addicted off the drugs and prevent those who haven’t from joining.

Drug use is not just limited to shady areas in the slums. It is rife even in various institutions of higher learning. University students seem to have easy access of the drugs as they are rampant in most campuses in the county. This is worrying as the county risks losing its best brains to drugs and substance abuse. Erick Barasa who is a student at a local university thinks the institutions’ authorities are not doing enough to weed out the problem.

To most residents, it seems as if a whole generation of strong citizens will be sucked into this vice while everyone watches helplessly.