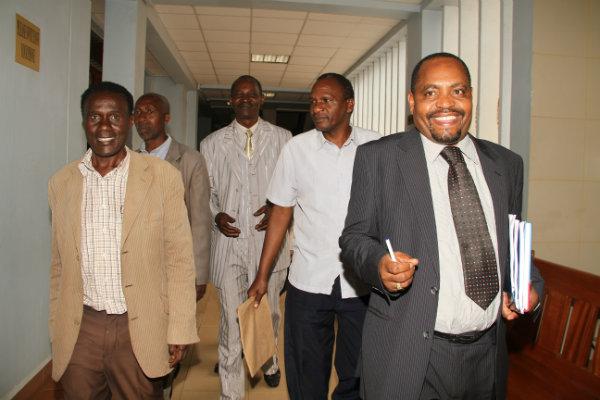 Photo courtesy of The Star newspaper

Yesterday’s decision in which the High Court ordered government to compensate former political detainees shines a spot light into governments’ past mistakes, its current obligations and future decisions. Many Kenyans were wrongfully detained, with and without trial, for many months, some dying while those alive are fighting for the ‘restoration of their human dignity’.

In the court ruling, Justice Isaac Lenaola awarded nine former Kenya Air Force officers Sh19M for unlawful arrest, detention and torture during the 1982 attempted coup. He ruled that the brutal arrest and inhuman treatment the nine were subjected to was a violation of their rights.

The nine had argued that in August 1982 Kenya Army soldiers stormed the Nanyuki Air Base and ordered all Kenya Air Force officers to surrender. They were disarmed, arrested, stripped naked and beaten using fists, kicks and gun butts. They added that they were locked in a makeshift cell in the supplies block without enough ventilation and were fed one meal a day. The nine were detained between periods of 40 to 120 days.

However, some of them are considering appealing the ruling saying the compensation is too little. They are relying on the previous case in which Judge Mumbi Ngugi had awarded Koigi wa Wamwere sh2.5M only for him to appeal and was awarded sh12M.

It is not the first time that the courts have come to the rescue of former political detainees. Former journalist Otieno Mak’Onyango was awarded sh20M for wrongful detention.

Lawyer and activist Mbugua Mureithi who represented the nine explains that there are no standard guidelines on what determines how much one is compensated.

“Courts consider the period and intensity of torture and any precedence set on the matter. That is where a judge becomes very important,” he asserted.

There are other cases ongoing in courts. For instance, a former air force officer detained for four years, without trial, no court martial has sued the government for compensation. His case is likely to lead to higher compensation since he has evidence of all correspondence that show the magnitude of the unlawfulness the government held him. For instance, he kept all letters sent by his wife in which they were first opened by police officers, read, then enclosed and marked censured before he is given to read.

But even as these cases increase, another concern lies with enforcing the judgments. Koigi has yet to be paid though he told Kenya Monitor that he is yet to seek the compensation from the Attorney General’s office. Otieno Mak’Onyango stayed for years without being compensated. The former MP was detained following the abortive 1982 coup during the Moi government. In her ruling on June 13th 2012, Justice Kalpana Rawal affirmed that Mak’Onyango’s fundamental and constitutional rights were violated. He had demanded sh2B for wrongful detention of over 4 years.

Sadly, Mak’Onyango was only partly paid last year, after years of going back and forth in the Attorney General’s office. News story had shown him living in squalor conditions, perhaps the airing of it led to some humane considerations from government.

Another example is that of former photojournalist Wallace Gichere, now deceased. Wallace died on 26th of April 2008, aged 53. In 1991, Gichere was thrown by police out a three-story window in his house in Buru Buru, Nairobi, during a crackdown on the Kanu regime, an event which left Gichere paralyzed for life.

He needed to use a wheelchair and had no way of earning an income. He fought for compensation from the Kenyan government for almost a decade, including staging a hunger strike at the Attorney-General’s chambers for several days and nights. He was compensated after these hunger strikes in which various activists joined him at the AG’s chambers but did not live long to enjoy them as he died soon after.

Mbugua explained that in awarding these compensations, the courts are doing their jobs to enforce fundamental rights and freedoms that they had been suppressed. This is to ensure that government is held accountable for mistakes of the past and to secure the future.

This laxity to recover compensation can be attributed to archaic laws. No law exists that stipulates once you have been compensated, the process of recovering it. In addition, the Government Proceedings Act does not allow for attaching government property if it fails to pay any debts. The Public Finance Management Act only has provisions for payments of external debts. It is estimated that the government owes between sh5B to sh30B to Kenyans in compensation claims.

Their origins come from ancient common law, that the King does no wrong hence one could not sue government. The Crown Proceedings Act came into force in 1948 which allowed it but said you cannot compel enforcement against the King because courts are his. Ideally this should have ended in 1964 when Kenya because a republic but they are still in our statutes. Mbugua said

“such a law is a mockery of independence the judiciary enjoys because it means that a court can make a ruling that is not binding or that the government is not bound to commit because of another restricting law.”

This is a position in many commonwealth countries. However, South Africa did away with it in 1999. Theirs was referred to as State Liability Act but which the courts ruled them unconstitutional. After the ruling South Africa passed amendments to the law that also stipulates the procedure and timelines including if not given, what you can do, which is by going back to the courts which can then give an order to attach property of that government department.

The idea behind the petition is to ensure there is accountability for human rights violations. Mbugua says

Meaning that treasury should find itself budgeting for these compensations amounts similar to funding ministries and departments a situation which should compel the Cabinet Secretary for Treasury to inform government, especially the President on the need to abide by fundamental rights and freedoms so that these allocations are used for developments and not compensations.