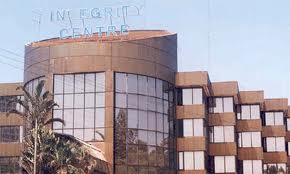 EACC headquarter in Nairobi.Eight Makueni County officials have been arrested by the anti-graft body for corruption allegations.
Photo:Google

The eight who are said to be members of the tender committee were later released on a cash bail of Sh50,000 and are expected to appear today before a Machakos court to answer to the charges.

Initial and unconfirmed reports posted on social media had indicated the Health Executive Dr. Andrew Mulwa and Assistant Director for Research Nthiwa Kilindi who are close allies of Governor Kivutha Kibwana were among those nabbed creating frenzy on social media.

The post  from Twitter and shared in a  Facebook group called Makueni County  Sharing Forum drew more than 200 comments within the  first hour  including the Governor and the other two officials who were erroneously mentioned.

The two officers have since demanded an apology from Terry Nzau who initially Tweeted the arrests. The post has since been pulled down.

In the Governor’s post which has been re-posted in his official Facebook page, Kivutha admitted that the officers had been summoned by the EACC  and would appear in a court today in Machakos. He absolved the officers from any wrong doing and instead turned the heat of the Members of the County Assembly who he accused of witch-hunt.

“The County Assembly of Makueni made allegations to EACC that we, the Executive, had authorized expenditure ovér and above the budget for Kikima Mini-Diary. The EACC has today notified 7 members of our tender committee and the Ag. CS that they should present themselves at Machakos Law Courts for official charging tomorrow.”

It continues to read,

“Regarding Kikima mini-diary, the committee did a first open tender where the tenders were in the region of sh12M. They did not award any company. During the second bid, which was also an open tender, the tenders came to about sh6m. The committee awarded the lowest bidder.”

According to Kivutha the fact the the tender committee did not award the Sh12M tender saved the county money.

“As a governor I am persuaded that the tender committee ensured we got value for money by refusing to award in the first instance and awarding to the lowest bidder in the second instance. The Assembly delayed the budget up to November 2013. This made real procurement for about 600 projects start in April 2014 after the survey, design and preparation of Bill of quantities or specifications. The tender committee had to work even past midnight in many occasions to help us meet our obligations.

“God is the source of truth and justice.”

The arresting of the officers comes barely two days after the Director of Prosecution Keriako Tobiko recommended for the prosecution of the Governor and the tender committee members for spending over and above the approved budget in the 2013/2014 budget.

The arrest puts the Governor who is seen as  anti-corruption crusader in a tight spot. The MCAs have been on the record accusing the Governor for abetting corruption and time will tell whether the MCAs were right or perhaps it is a case of witch-hunt as Kivutha has intimated.

The timing of the arrest could also raise eyebrows coming hot on the heels after the commission of inquiry unearthed the rot of nepotism and graft in both arms of the government. The governor while testifying before the Mohammed Nyaoga – led commission waded through the murky waters of corruption allegations with tact and admitted to institutional and personnel challenges that could have led to the pilferage of millions of shillings.

Consequently, the fact that the news first broke in social media through a Tweet from a journalist confirms the role of social media in relaying information instantaneously to a large number of people long before the mainstream media. However on the flip side the fact that some of the officers were falsely mentioned is also another confirmation that social media is awash with rumors and allegations that could have far reaching consequences on the persons involved.

Therefore, as journalists adopt social media as a source of news, its prudent that caution be exercised to avoid misrepresentation of the facts.